For the advanced lessons on career opportunities for NYIP's Complete Course in Professional Photography, we talked with photographers of all sorts about how digital image capture and the digital darkroom have changed the way they work. We had the good fortune to conduct very interesting interviews with the photography divisions of some of America's most noteworthy uniformed services. What we learned was so valuable that we decided our nyip.com readers would also be interested. Here's a very special group for whom we've all found new respect and admiration in recent years – the New York City Fire Department. 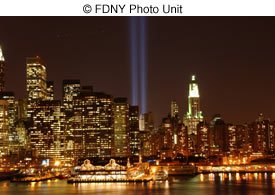 When people think of the New York City Fire Department many things come to mind but not necessarily digital fire photography. It's impossible to write about the New York City Fire Department (FDNY) and not recall the incredible sacrifice that over three hundred members of "New York's City's Bravest" as they are called, made on September 11, 2001 evacuating thousands from the doomed World Trade Center. As often noted of the FDNY that day, "All Gave Some, and Some Gave All."

The New York City Fire Department has gone digital and then some. From Human Resources pictures that are now taken of every uniformed member at each of their 15-month physicals, to dramatic documentation of three-alarm fires, to providing PowerPoint presentations on safety for training and education, the FDNY Imaging unit is very busy. With a staff of only five fire photographers, the Imaging Unit provides all still and video photographic services for New York City's 200-plus firehouses and all the FDNY headquarters administrative needs. With a small staff, high demand and a big city to cover, efficiency and productivity are crucial. For this multi-talented group of photographers faced with multiple tasks, switching to a digital workflow has made all the difference. 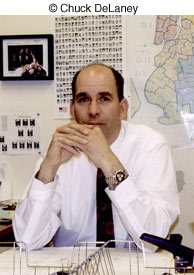 As Supervising Fire Marshal Ralph Bernard put it, "We went from the Flintstones to the Jetsons." Not only have they made the transition, but they did so rapidly.

Up until January of 2001, all of the FDNY's Imaging Unit's photographic work was shot on black-and-white film then processed and printed in a traditional chemical darkroom. An expensive and slow process, the old photo archives still take up many huge file cabinets at FDNY headquarters in downtown Brooklyn.

The primary goal of the FDNY's Imaging Unit is photographing for documentation and education. The staff of fire photographers produce huge quantities of files that need to be archived and accessed by a number of people for an array of needs. In 1996, the Department started to explore digital as an option to see if the idyllic potential of the digital world would work for their capture and database needs. However, at the time the equipment was too expensive to be practical and was deemed to be beyond their budget means. By January 2001, the cost of digital equipment had finally fallen to the point that going digital became a viable alternative. A few digital SLRs were purchased along with scanners and a database software system and the process of educating themselves and integrating a completely digital workflow began. 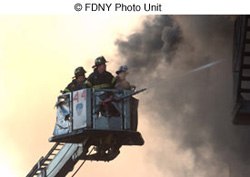 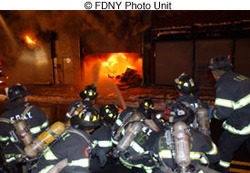 Obviously, that the department started in the digital world in 2001 is a coincidence that must be noted. Slow digital beginnings were catapulted into high gear after the events September 11, 2001.

In the hours after the attack on the World Trade Center, an already over-stretched Imaging Unit found itself challenged beyond its limits to get fire photography images and other crucial visual information out to aid firefighters and all rescue workers in the search and recovery efforts. Fortunately several commercial photographic manufacturers and vendors, including Nikon, Fuji, New York's B&H Photo and Hewlett-Packard, stepped forward providing cameras, computers, memory cards, minilabs, software and on-the-spot training to provide the FDNY Imaging Unit the support it needed keep up with demand. 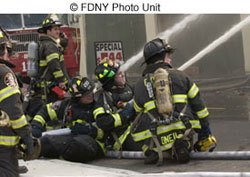 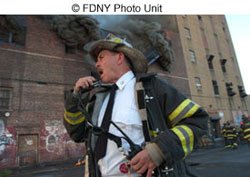 Within the first few hours after the attack on World Trade Center towers, the FDNY fire photographers were capturing some of the first images of downtown Manhattan's changed landscape with handheld cameras from low-flying helicopters. The images were all shot digitally, burned to CDs and immediately distributed to department heads and other government agencies. These CD compilations provided a crucial first bird's eye view for the FDNY's emergency Phoenix Unit that was stationed on the ground and in charge of the emergency logistics - orienting rescue workers, establishing transportation routes, avoiding smoldering fires and dangerous structures. The FDNY re-photographed the changing 16-acre topography of Ground Zero daily. These photographs were pieced together with satellite imagery and other geospatial data to give the emergency response operators and decision makers a clear visual picture of the magnitude of the disaster area that they could not get from the ground. 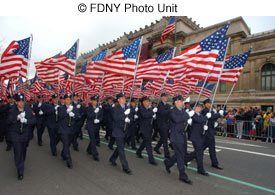 The other daunting and heart-wrenching task Ralph Bernard's Unit had to deal with was locating images of all the missing FDNY members. This proved to be particularly challenging due to the Unit's old archival system and the long-standing protocol of only photographing firefighters when they first joined the Department. On the afternoon of 9/11, and well into the next several days, the Imaging Unit found themselves searching through old personnel files to locate and then scan the photographic prints of missing firefighters - headshots that had been stapled or taped to personnel files, sometimes fifteen or twenty years ago. There were many factors that were problematic about this situation. First, some of the photos were over 20 years old, and not very helpful for identification purposes. Second, the Unit was under such pressure to create a digital database quickly to aid in the search and identification of all the missing firefighters that they scanned everything in low resolution to save time.

After the specific information regarding which firefighters were missing and later presumed lost became known, all of the photographs of these brave individuals had to be re-scanned at higher resolution. There were many hours of Photoshop work to repair damage to images from the staples and other factors such as tears, creases and show-through from names that had been written on the back of prints, some of which had resided in personnel folders for a decade or more. Only after that treatment were prints provided for press, family members, and funerals and memorial services. 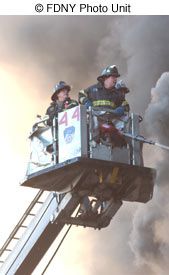 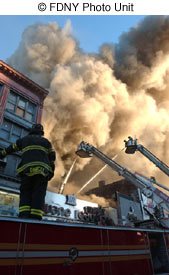 Since the time when the Fire Department weathered 9/11 and the transition to digital, many things have changed in the FDNY Imaging Unit. For one, they now photograph every firefighter at every 15-month physical to keep up-to-date photos of each member and store the high resolution files in a digital personnel database. Another lesson learned by the FDNY fire photographers is the necessity for image capture at the highest resolution, and files that are named properly and stored in the right place.

Assignment: Training for The Bravest 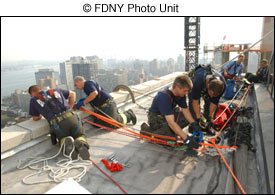 Fires are unpredictable, dangerous, and warrant immediate emergency response. It is hard to prepare and train individuals for something you can't predict or necessarily control. This is why constant documentation of fires, changing equipment, and department protocol by the Imaging Unit is so important to the operations of the FDNY. All of the still photography, video, and PowerPoint presentations the Imaging Unit produce are key contributions not only for the Fire Training Academy and but also for keeping veteran firefighters up to date on changing conditions. 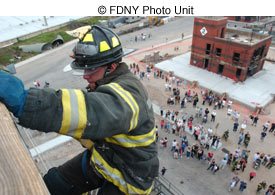 In going to photograph a new office building being constructed and the kinds of materials being used for potential future reference, or by creating a training video on a new respiratory mask, the Imaging Unit plays a crucial behind-the-scenes role in educating and ultimately saving lives. Digital photography, video, file sharing and presentation have yielded increased accessibility, productivity, and usability of the FDNY's visual resources and history. PowerPoint presentations are easily distributed and displayed in the city's firehouses and fire photography images from a three-alarm fire can be e-mailed to headquarters before it has even been extinguished.

NYI wishes to thank the New York City Fire Department and Supervising Fire Marshal Ralph Bernard of the Imaging Unit for granting us this unforgettable look at the fire photographers and the operations of FDNY. 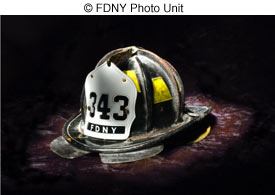 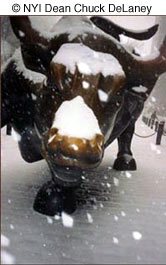 'Tis the season, and we're getting lots of letters from NYIP students and other Northern Hemisphere… 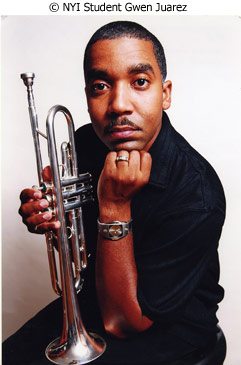 Portrait skills are an important part of any professional photographer's bag of tricks, regardless of that individual's…