Picture of the Month Glamour

If you were to stroll past almost any news stand in New York, London, Paris, Milan, or points in between you would possibly be overwhelmed by the exhaustive magazine selection therein. Everything from Harley-Davidson motorcycles, wrestling, liposuction, guns and ammunition, sexy underwear, weight loss studies, and house remodeling. Hundreds of magazines, innumerable specialties, and each magazine replete with slick, highly professional photographs and other kinds of illustrations.

Among this potpourri (or these potpourri, if you prefer) there are some old standards going back to the earliest days of magazine publishing - women's fashion magazines. Godey's Lady's Book, for example, popularly read in the 1850's. And the fashion magazines are still with us, no whalebone corsets any more, perhaps no corsets at all! Why bother?

Today, though, there seems to be less interest in the garments and substantially more concern about the super models: Heidi Klum, Tyra Banks, Cindy Crawford, Kate Moss, Naomi Campbell, to name but a few. The rich super stars of the magazines, the tabloids, television, whatever. And if there is less interest in the garments there is even less in the fashion photographers. After all, any kid with a camera (and neither training nor talent) can be a photographer, can't he/she?

But, as they used to say on the Lone Ranger radio show, let us return to the days of yesteryear — in the fashion magazines when the couturiers, the garments, and the photographers who glamorized them ruled the magazine roost! The days of Captain Molyneaux, Worth, Schiaparelli, Madame Vionnet, Dior, Fath. The days of Edward Steichen, Baron Gayne De Meyer, Hoyningen-Huene, Horst, Cecil Beaton, Penn, Avedon, Louise Dahl Wolfe, Toni Frissell, et al.

When I first saw our Picture of the Month, created by NYIP Student John Gonzalvez of Los Angeles, I felt that you, the readers, would appreciate this photograph. It is so much in the style of the famous fashion photographers whose splendid images graced the pages of Vogue, Harper's Bazaar, Vanity Fair, and others in bygone years.

What's the first NYIP Guideline? The need for strong subject matter, Well, how about this attractive model in a period gown, a fur stole draped about exquisite shoulders, well shaped hands artfully posed. The dreamy far away look, waiting for the lover who may (or may not) appear.

The second Guideline insists that the photographer must focus attention on his his/her subject. Not only do we notice the graceful pose but also the excellent use of the Rule of Thirds, placing the subject off center. Also, the photographer used the pillars as framing devices.

Speaking of pillars, these columns were familiar props in the Golden Age of Fashion Photography. No fashion studio was complete without representations of classical antiquity-columns, horses' heads, busts, full length statues from Greek, Roman, Egyptian, and Chinese mythology.

Note the use of spot lights. In earlier fashion photography there was not so much emphasis on soft diffused lighting. Instead, there was a frequent use of small spot lights to accentuate limited areas on the model's body and on her garments. You can see that here: on the women's left hip, on her face and left shoulder. By contrast, though, there are deep pools of inky darkness that leave much to the viewer's imagination, thus creating an air of mystery. Today, we "let it all hang out", often to the detriment of the model, the photographer, and the couturier. I prefer the subtlety of an older generation.

Our third Guideline calls for simplification, and so what do we have? A fairly simple background, a few spot lights, a lovely model, an elegant outfit. Nothing particularly fussy or over exaggerated.

And one final point: the model is a mature woman, one with an elegant well-shaped body and features. In the Golden Age of Fashion Photography there was no place for anorexic "spaced out" youths. After all, they were not the ones who bought such expensive couturier outfits. 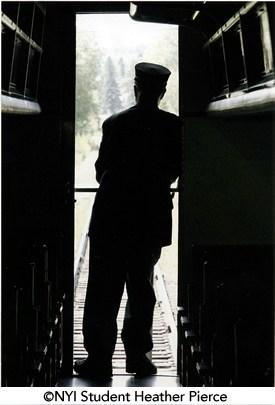 The great days of railroading in America are gone now. We still have trains, many of them, but the aura, the mystique, the sheer…