Picture of the Month He's Safe 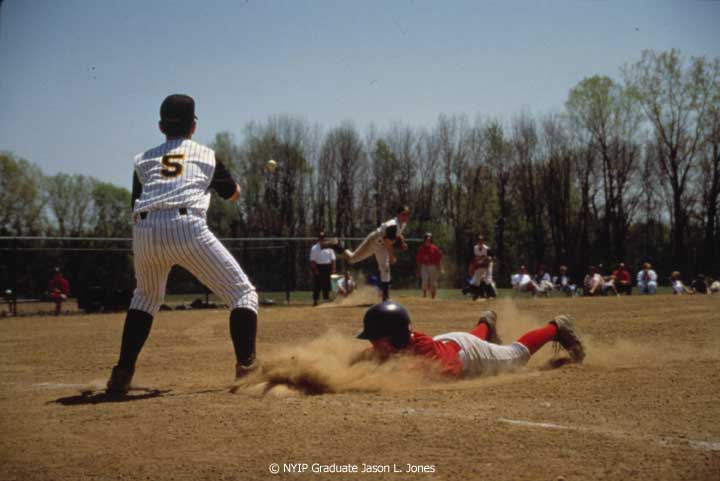 It's 30 degrees Fahrenheit here in New York as I write this and snowing — not exactly baseball weather. But I'm dreaming of Spring and the sound of a bat striking a ball. Ok, I'm not really a baseball fan, at least of the Major League level. But Triple A ball and lower is another matter. The fan can often get closer to the action (the fields where the game is played are usually smaller) and you almost feel you are part of it all.

When I was a kid growing up I was a serious fan of the Rochester (NY) Red Wings, at that time part of the International League (I believe they still are) as well as a member of the Knot Hole Gang, a sort of kid's club. The big player in those days (and I do mean BIG) was a massive first baseman named Steve Bilko, the homerun king at the stadium. The Red Wings were the minor-league farm club for the St Louis Cardinals but I don't know their relationship with MLB today. However, those childhood experiences were some of the best of my life. I even got an autograph on a baseball from Bilko though the ball is long gone.

Ok, enough of nostalgia. Let's take a look at this photo by NYIP Complete Course in Professional Photography graduate Jason L. Jones. Not a major league game obviously but at a high enough level for the players to have full uniforms. Hard to tell the ages but my guess is they are teenagers though perhaps they are older. What's going on here? Well, it's certainly not a softball game judging by the size of the ball being thrown and the base runner taking a "header" suggests a really serious level of play. So what is the subject in this shot? A baseball game certainly but perhaps more than that. It's also a battle between three people - the base runner and two of the defenders. I suppose all sporting events, whether involving teams like in baseball or between two players such as in singles tennis are such battles. I don't want to carry the "war" analogy too far though I think it fits with football, a rather violent enterprise.

Photographing baseball is fairly easy because the action occurs on a well-defined grid so you can pretty much predict where that action will happen. Usually it's where the ball is located. In this image the ball is actually in midair (it's to the right of the defending player's right arm) but we know where it's going. The viewer's attention is drawn by that ball but we wonder what will happen when the ball reaches the player guarding that base. Will he catch it in time to tag the runner? Or will he drop it? I'm guessing that the base runner was not tagged out though it's difficult to be sure since the bag (2nd or 3rd base I assume) is partially obscured. Anyway, I think he made it.

Might this photo be simplified in some way? Well, I suppose it could be cropped as I show here. Such a crop does tend to focus more on the three players. However, the original framing shows a bit more of the surrounding environment. Personally I prefer the original but that's just me.

What I especially like about this image is how it captures the essence of the sport at a peak moment of the action. Baseball does have periods when nothing is going on. I'm not referring to time outs but rather than when everyone is waiting for the batter to step up to the plate or waiting for the pitcher to begin his windup. Basketball, by contrast, is practically non-stop. Then there is golf. Those players spend more time walking (or riding those little carts) or just looking for the ball though top-seeded pros usually know where their ball went. Fans may hate me saying this but I think golf for the spectator is a great treatment for insomnia, especially when shown on TV. Zzzzzzzzzz 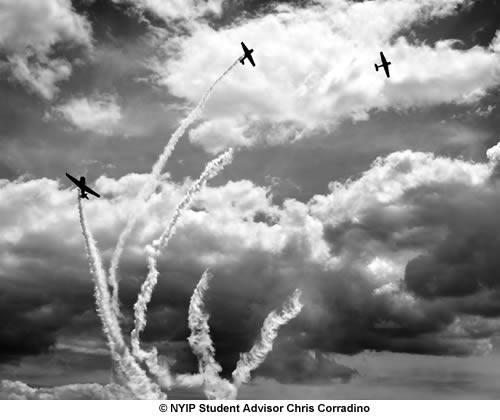 When NYIP Student Advisor Chris Corradino suggested an article on air show photography, we encouraged him to write it. After all, in addition to being thrilling for all the…
Tips for Macro Photography

In this video shot on location at Eisenhower State Park in NY, I discuss how to use Live View to micro focus on tiny portions of a subject. Rather than…