Picture of the Month Mount Fujiyama with Cows 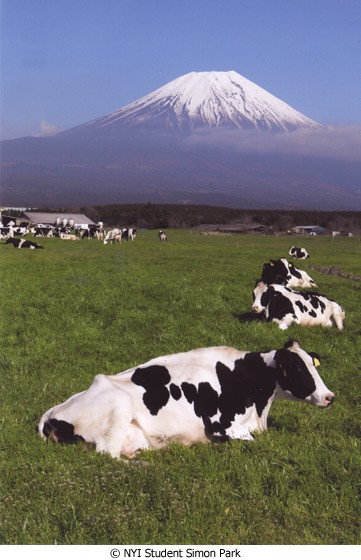 If you have the good fortune to visit Japan, and I hope that you do, there are so many fascinating sites. The more famous ones include the great statue of Buddha (the enlightened one), aka Siddartha Gautama; you'll find the statue at Kamakura, about 60 miles southwest of Tokyo. Travel diagonally from that point in a northeasterly direction, and you will come to Mount Fujiyama, surely the best known symbol in all Japan — grist for the mill of writers, poets, artists, religiously devout, and so many others.

I first saw Fuji from the air many years ago. I was in a plane en route from Wake Island to Tokyo. The skies were heavy with rain and fog; you could hardly see anything as we neared Honshu Airport. The plane banked slowly and began the descent.

Then, suddenly, the clouds parted. The sun burst forth, and there in the distance stood Fujiyama. It is nearly 13,000 feet high, a big mountain by any standards, its flat peak always capped in snow.

Fujiyama is not a craggy peak like the Matterhorn, Mt. Everest, or Aconcagua in the High Andes. Fuji's slopes are relatively smooth, its crest flat like a butte or mesa. For it is a dormant volcano with no major eruption since the first decade of the 18th century.

Since Mt. Fujiyama has been depicted thousands of times by countless artists and described verbally by great numbers of writers, why has NYIP chosen it for the Picture of the Month? Cliché upon cliché, no? Endless repetition of the obvious. But this picture of Fuji is different than others that we have seen. Why so? Because it is not so much a photograph of the volcano as it is of the foreground in front.

The subject is not really the mountain. The subjects are these wonderful cows in the foreground — four of them quite visible and a fifth one barely seen in the upper left center of the photograph. Are we sacrificing a mountain sacred to many believers in favor of some contented Elsies munching grass — and not even bothering to stand up! The sacred, no; the profane, yes.

Is there a difference? Not really, if you think about it for a moment. Go southwest from Fujiyama and you reach the aforementioned statue of the Buddha at Kamakura. Would not the Enlightened One have affirmed that the great mountain and the bovine "ladies" on the lawn are one and the same? The Buddha would have told you about the oneness of all things, that mountains and cows are all God's creations and therefore equal in His eyes. The sparrow and the mustard seed are tiny, but He sees them, does He not? And He sees the great leviathan in the mighty ocean, too. Nothing, but nothing escapes His attention.

Perhaps man in his arrogance (and ignorance) perceives a distinction.

It's time now for the waxing ecstatically to wane, and we must take up the more prosaic elements, namely, a discussion of the three NYIP Guidelines.

First, note the excellent use of the Rule of Thirds, the first cow in thee lower third of the photograph; she gazes to the right. The second cow rests in the right hand third and gazes, contentedly, to the left. Third in line is a cow in the right center third, and, she (like the first one), looks to the right. Above the third one is a fourth one, off center, and studying the grassy field on the left. And, finally, there is a fifth cow in the far distance near the village huts; she, too, is off center.

In the second unit of the NYIP Complete Course in Professional Photography we discussed the use of leading lines, lines that direct the viewers' eyes farther into the scene. While we normally think of such lines in terms of man made object, e.g., railroad tracks, there is no reason why cows cannot display such formations. They do that, here.

The photograph was made in bright sunlight, a condition that emphasizes texture and also does justice to saturated colors. If the picture had been made on an overcast day or in open shade there would be very little texture to be emphasized, but all colors (both saturated and subdued) would show off brilliantly.

Is there a simplification of themes or subject matter here? Of course, there is. Count the elements — several cows, the great mountain, the grass and sky, a dimly seen village — that's all! Simple subject matter simply portrayed.

The photographer is Simon Park, a member of the U.S. Armed Forces and recently enrolled in NYI's Complete Course in Professional Photography. We think that his work shows much promise. 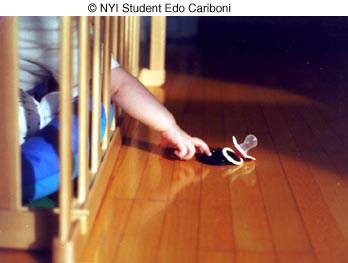 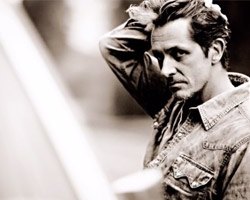