Picture of the Month Walking Along a Trail 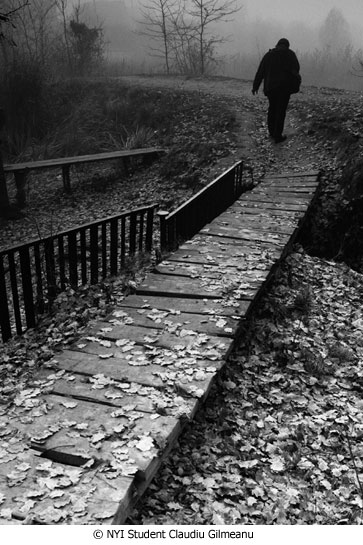 Nostalgia is a frequent theme in photography and has been ever since photography's inception. What better record showing how the old farm looked in Grandma's day than that possibly tattered faded snapshot of the homestead? So, nostalgia is our current theme, too. I found an excellent example this month, a photograph made by NYIP Student Claudiu Gilmeanu of Bucharest, Romania.

During the Great War (WWI) there was a popular ballad with the lyrics "there's a long, long trail a-winding into the land of my dreams...". Gilmeanu's excellent photograph reminds me of that song, too.

Of course we can't say with certainty that the photograph represents nostalgic memory as suggested by the ballad's sentimental lyrics. But it's possible thought, no? And as good as any other, too. I suppose that the problem stems from my attempt to verbalize what I am visualizing; one really can't do it.

A short digression here. The great Minor White, a seminal influence in 20th century fine art photography, once saw a photograph of a downed tree. The photograph was made by White's friend and mentor, the famous Ansel Adams. A beautiful photograph, White noted, but what did it really mean? And Ansel replied that it was meant to be a picture of a downed tree. Minor White was non-plussed! The point of this little anecdote being that we should refrain from verbalizing something that we have perceived by visualizing. Yet what other way can we respond unless perhaps by making another picture to explain the first one?

So, I'm following the nostalgia track here and stating unequivocally that the man is walking along a trail a-winding into the land of his dreams. If I'm exaggerating then let my nose grow like Pinocchio's.

In case you think that I may have forgotten, let me remind you of the three NYIP Guidelines that we want to see in every photograph: strong subject matter, focusing attention on the subject, and then simplifying the picture by eliminating all that is unnecessary while retaining all that is important. The photographer, Claudiu Gilmeanu, has achieved these criteria successfully.

His frame has been very well filled; there is nothing that needs to be cropped, no extraneous material. Thus the picture has been well simplified. The theme of nostalgia has been well established as the subject matter.

Techniques for focusing attention include the leading lines of the boardwalk and railings (plural), the stark contrast in tonality, the off center placement of the man (Rule of Thirds), etc.

Note the exaggerated perspective — how wide the boardwalk is at the bottom, how narrow at the top. I believe that the photographer achieved this effect by the use of a very wide-angle lens. This is the so called "dog's nose" effect that we showed in the NYIP Complete Course in Professional Photography lesson materials (a beagle or basset with a big nose and relatively small body). And if the photographer had used a large format view camera he could have gotten a similar result with a normal lens but probably would have had to tilt the ground glass backward away from the lens's normal position.

Footnote: very few NYIP students have ever demonstrated any real appreciation of a large format view camera. More's the pity as much photography can be learned from the use of this ingenious piece of equipment.

I particularly like the mood of this picture as determined by the placement of tonalities. It's relatively easy to display a bright cheerful aspect simply by photographing in bright sunlight. Too many of us think that this is the only daylight possibility. But we miss some wonderful opportunities for beautiful photographs by limiting ourselves to sunlight. The next time that you find fog and rain get your camera out and start photographing; you can get wonderful results.

I hope that you like the photograph as much as I do. 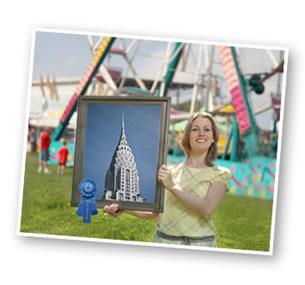 Your Blue Ribbon May Be at the State Fair

In many regions of the world, there are multiple fairs happening every weekend starting in the spring and…