Picture of the Month What Are You Looking At

This month, we're glad to note that NYIP Contributing Editor Richard Martin has graciously provided us with his analysis of a provocative student photograph. Students who have had the good fortune to work with Richard know that he has a keen eye and knows how to get to the bottom of what works in a photograph, and how subtle changes can affect the image's meaning.

At NYIP we teach our students a simple Three-Step Method for setting up every photograph they shoot:

This simple Three-Step Method is the secret of every successful photograph ever taken. We teach our students to consider these three steps every time they look into the viewfinder. To consider them before they press the shutter button.

How do they work? How can you apply them? It's beyond the scope of this Web site to teach you every nuance, but you will get an inkling from the Photo of the Month Analysis that follows.

What Are You Looking At? 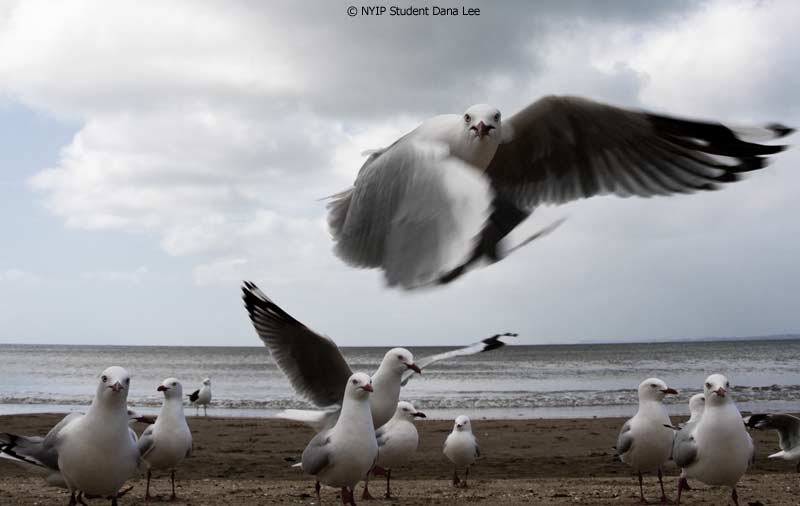 Wildlife photography is always difficult and birds especially so, particularly when they are in flight. Soaring birds and those that hover are the easiest to capture with the camera — species such as hawks, eagles, vultures, and owls fall into this category. Other types such as sparrows, finches, and the like are another story. And then there are seagulls. Gulls typically feed on prey like crabs and small fish but in my experience they'll eat almost anything. Anyone who has had a picnic near a body of water that contained gulls knows that they are aggressive, opportunist feeders and will literally snatch food right off your blanket or table. And a large group of them can be really loud with their incessant squawking. I wouldn't go so far as to characterize them as "flying rats" but you get the idea. On the other hand, they are pretty easy to photograph for the most part.

This image, by NYIP Student Dana Lee, clearly shows seagulls as the subject. Through the principles of placement and large size our attention is immediately drawn to the subject, especially to the bird in the air. We teach these compositional principles to our students early in our Complete Course in Professional Photography and they are routinely employed by photographers everywhere.

However, is there anything in the photo whose removal might simplify and improve the shot? Normally we prefer to do this BEFORE pressing the shutter release button but that's not always easy or even possible with a dynamic and moving subject. In that situation it's usually best to get the shot when MOST of the elements we want are in place, THEN add any improvements during post-capture processing. For example, I believe that the partial image of a bird on the far right corner of this photo is rather distracting so I show how the image looks without this element by simply cloning it out in Photoshop. I recognize that such adjustments can be controversial and sometimes violate certain rules. And here, it might be argued that this particular element is quite minor so its removal is unnecessary. What do you think?

Image manipulation has been a hot topic for a long time. I wrote an article about this subject a few years ago but the issue regarding "photoshopping" is just as much a concern today and when my article first appeared. You can read it here.

But let's get back to the seagull photo. Any other problems here? Well, I'm not too fond of the fact that some of the birds on the ground have part of their feet cut off. Better framing might have eliminated this but again not always possible with a dynamic subject like this. I believe there is a fix with Photoshop, at least with the later versions, but that's rather beyond my current skills to illustrate.

Is this critical? No, I don't think so. Anyway, the main subject is really that bird in the air stating back at us. I especially like the fact that this gull is clearly outlined against the sky.It's hard to look at this image and not stare right back at that cheeky bird!

What else? Notice that the horizon line is placed in the lower third portion of the shot thus making the image conform to the well-known Rule of Thirds. More of a guideline than a hard and fast rule but here it works especially well because it gives us a completely unobstructed view of the bird in the air.

All in all I think that Dana Lee has done an excellent job capturing a difficult subject. Kudos!

The following article was written by Chris Armold, an NYI student who called the school to let us know that he'd photographed several campaign rallies. Since the call… 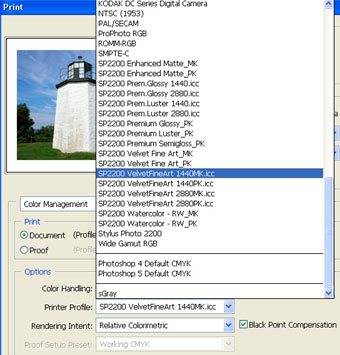 "The colors in my prints don't match the colors on my computer monitor" is a complaint we often hear from students. The solution, in a nutshell, is a color-managed workflow.…