When Ben offered to write about his experience using Canon's latest professional camera body photographing the last games of the New York Giants season, it was far from clear that the Giants were bound for Superbowl XLVI in Indianapolis. We know you'll learn a lot and marvel at these great action photos documenting the Giants victories over the hometown Jets, the Cowboys, and the Falcons on their way to Superbowl 2012.

For more information, read How to Photograph Football Part 1 and Part 2.You'll find some great tips whether you're taking pictures at the Super Bowl or of your child's high school game.

Sports photographers typically shoot fast action subjects in ambient or subpar artificial light. In order to adequately "freeze" action, having a high shutter speed is a must. Until recently, older digital SLRs built for this type of work were plagued by unacceptable noise levels at high ISO. We asked our expert sports photographer Ben Shyman to share his experiences testing the new Canon EOS-1D Mark IV he was loaned by Canon for the last few games of the New York Giants season. Little did we know Ben would be photographing the Giant's exciting run-up to the NFC Championship and a trip to this week's Superbowl LXIV in Indianapolis. Ben loved the camera, and you'll love his terrific action photos.

In the old Giants Stadium for example, ISO 800, f/2.8, typically yielded shutter speeds about 1/640th of a second. This compares to shooting in daylight where one can easily shoot at 1/4000th at ISO 100, f/2.8 or 1/2000th at f/4. Lighting in college and high school arenas and gymnasiums are frequently far worse than professional venues. Many professional photographers make their entire living shooting elementary, high school and college events. Strobes are one solution but are expensive, tak e significant time to set up and break down and are totally impractical in football and baseball venues.

The Canon EOS-1D Mark IV ($4,999) is a digital SLR for highly-advanced amateur and professional photographers predominately shooting action sports or wildlife. Unlike other professional cameras in Canon's digital SLR line such as the EOS-1Ds Mark III and Canon EOS-5D Mark II, which offer comparable state-of-the-art image quality and full-frame sensors, the Mark IV distinguishes itself from these models most notably with lightening fast advanced auto focus and continuous shooting speeds up to 10 frames per second. 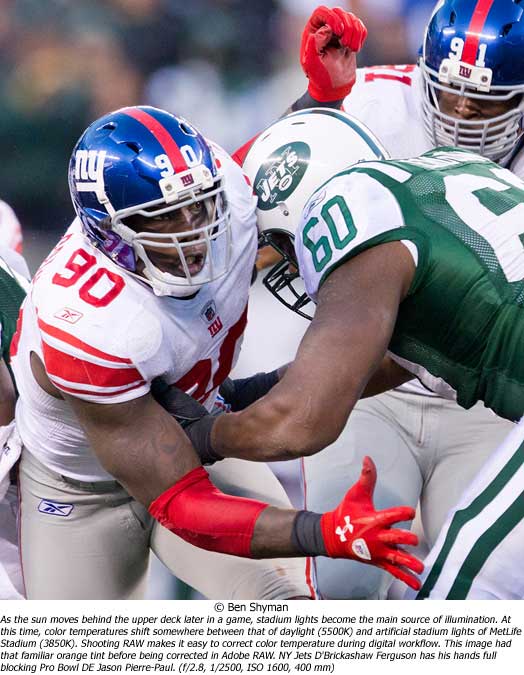 With the release of the EOS-1D Mark IV, Canon has created a camera capable of satisfying the most demanding sports professional photographer. Canon Professional Services was kind enough to loan me the Mark IV to shoot three New York Giants football games at MetLife Stadium and the results were remarkable. 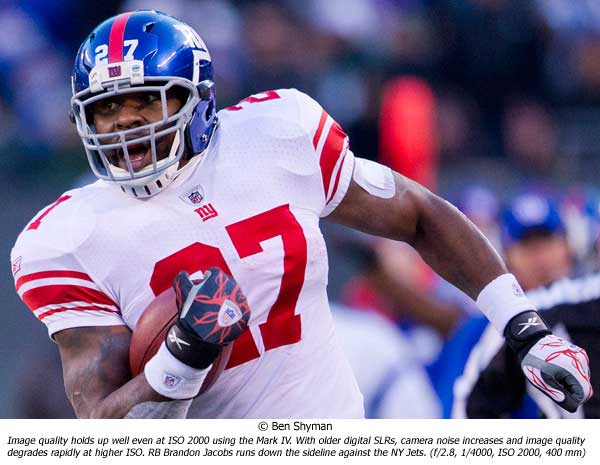 The Mark IV utilizes many of Canon's state-of-the art technologies to insure sharp, low-noise images. The Mark IV contains a self-cleaning APS-H sized 16.1 Megapixel CMOS Sensor. In addition, Canon's sixth generation processor, called Dual DIGIC 4, and a new AI Servo II AF focus tracking system insured I could quickly lock on to a moving subject and hold focus throughout the play. Versus older Canon models such as my EOS-1D Mark IIs, the Mark IV preserved sharper focus more often, especially in low light. There is no more deflating moment for a sports photographer than being in the right place, at the right time, with the right lens, targeting the right play and capturing a soft or out of focus image. In today's day and age with so many professionals using state-of-the-art equipment and competing on the sidelines for the best shot, your images must be sharp. Having reliable fast focus is a must. In my eight years shooting NFL football, I never captured a greater percentage of sharp images than when using the 1D Mark IV. 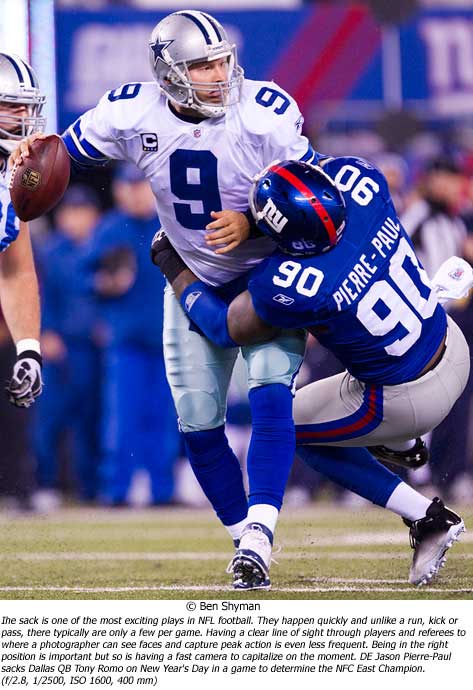 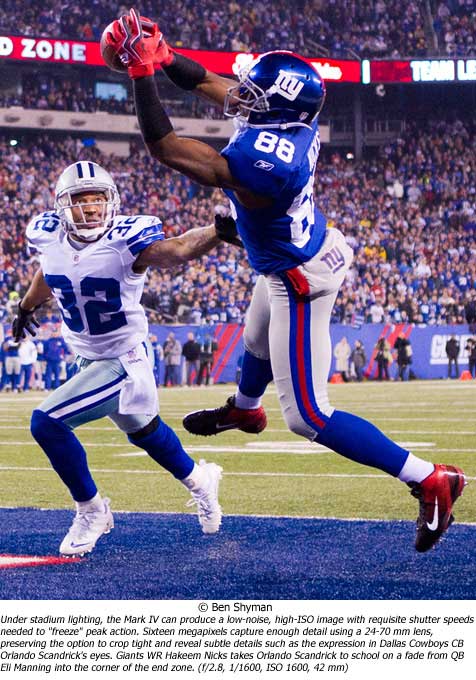 Under the stadium lights, I was able to shoot relatively low-noise images at ISO 1600, f/2.8, 1/2000th. With an ISO range of 100-12800 (1/3-stop or 1-stop increments), the Mark IV opens a world of possibilities for sports photographers. The Mark IV produces highly pleasing, low-noise images at ISO 1600 and it is now a reality to shoot at night under stadium lighting at f/4.0 with a Canon 500 mm or 600 mm lens. Typically I bring an arsenal of f/2.8 lenses for night events but the usable high ISO settings of the Mark IV means that the entire inventory of long lenses, especially those of the f/4.0 variety, are viable for sports shooting under virtually any arena lighting conditions. 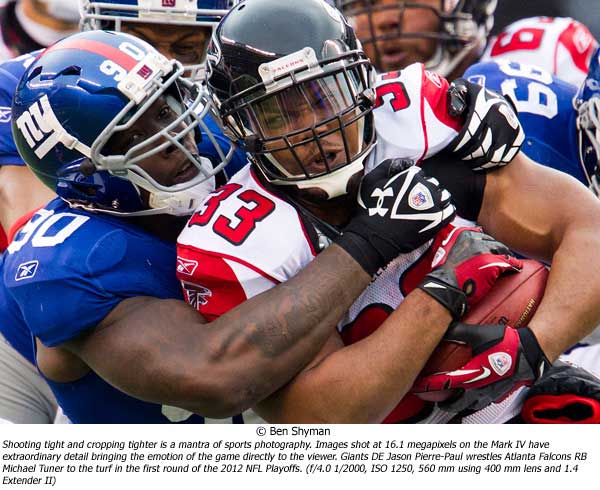 Despite that the Mark IV is two frames per second faster than my older pair of EOS-1D Mark IIs, I shot about the same number of images (about 1,500 to 2,000) that I usually take during a football game. I believe that because the Mark IV is faster and its autofocus is more reliable than previous Canon models, I was more confident behind the lens, ensuring I could target subjects more skillfully and shoot more precisely than ever before. That is not to say, however, that when coaxed that the Mark IV doesn't gallop. During Victor Cruz's 74-yard touchdown reception versus the Dallas Cowboys on New Year's Day, the Mark IV easily burst 25 consecutive large RAW images, using a 60 MB/s CF card, almost without pause. 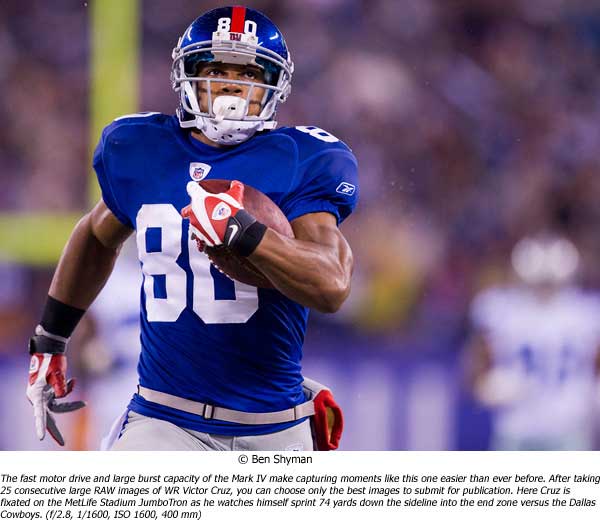 I wonder how I will ever go back to shooting with my Mark II camera bodies. The luxury of low-noise, high ISO performance and fast, reliable auto focus makes the EOS-1D Mark IV a sports photographers workhorse, especially in low light. In the race for digital camera supremacy, the Mark IV, in my mind, claims top prize in the Canon line for sports shooters. While as of this writing, Canon recently announced the soon-to-be-released, EOS-1D X, a full-frame, 18 megapixel, 14 fps beast, the Mark IV should remain a premier weapon in the arsenal of professional sport shooters everywhere. I love this camera and will be sad to send it back to Canon for sure. 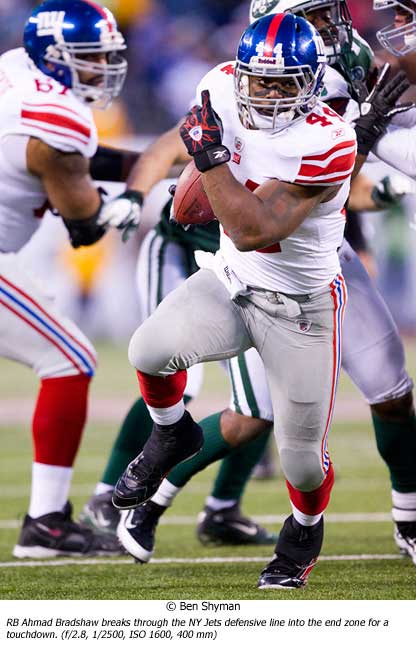 In NYIP online photography classes you will learn how to properly capture action shots like Ben has done here and much more! 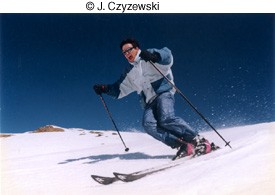 Sports photography is fun and interesting. We're talking here about downhill skiing and snowboarding, though the tips for great downhill photos are true for cross country skiing as well. Before…

NYIP is the world’s top online photography school, and because we are, we often publish fun and useful photography tips. Today, in honor of the beginning of another…