At approximately 11am on Tuesday, I received a call at NYIP Headquarters that went something like this: "Would you like to be interviewed by Inside Edition and possibly use a 600mm lens to demonstrate how the paparazzi captured the nude image of Kate Middleton?" Why not I said, jotting down the address and heading towards the elevator. This was for a National TV show on a story with International interest, and I wanted to offer my professional input. The weather however, appeared to have different plans.

Once outside, angry dark clouds conspired above while street litter took to the air in swirling wind patterns. "12th and 39th please" I said to the cabbie who started the meter. Just moments into the ride an email flashed across my phone, "Tornado Watch NYC". If the storm continued in our direction, my television debut would be wiped out by an actual twister. If anything I thought, I'll get a photo of the actual storm heading towards NY. 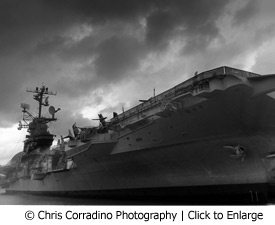 I arrived by the piers before the reporter, and quickly realized I had never been in this part of town before. The mega-sized aircraft carrier, the "USS Intrepid" towered directly in front of me. At 872 feet long, and 27,100 tons, how I had never seen this before!? I photographed it from a few angles, and then the rain started. My phone rang, and it was Megan Alexander, the reporter, who was just a few blocks away. I jogged to where their team was, shook hands and greeted the videographer, producer, Ms. Alexander, and other key Inside Edition staff before we got down to work. 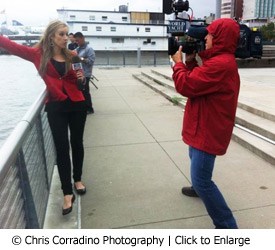 The plan was to use a 600mm f4 lens on a full frame camera (5d Mark II) along with a 2x teleconverter, transforming it into an enormously heavy 1200mm behemoth. We would take a ferry across the harbor to New Jersey and photograph the reporter on the New York side, over 1 mile away! This was a $15,000 dollar set up, all rented from a local camera shop. With converters, any aperture that becomes smaller than f5.6 in unable to autofocus. The 600mm was an f4, which coupled with the 2x made it an f8, so the entire shoot was going to rely on my ability to manually focus. Over my shoulder, it felt like a weapon of military proportions. Thankfully they brought a rented tripod, as the winds were still ferocious, and rain fell intermittently.

The weather wasn't the only problem though, as there was some last minute confusion about a permit. Luckily, the producer was able to plead with the security guards and receive the necessary permission. There was a tight deadline to have all footage in by 2:30 and time was waning. The ferry would leave in 10 minutes and panic ensued. In the meantime we shot a few segments of me assembling the gear, and answering questions about it. 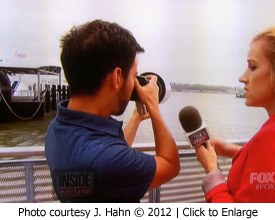 Finally, we were allowed to board the ferry and docked in Jersey just six minutes later. Again, the rains picked up and blew the frazzled Producer's umbrella inside out. We ran, yes, ran with this gear and found a suitable spot with a clear view to where the reporter waved from the NY side. At first, she appeared small in the frame, but zooming in on the LCD revealed that she was reasonably sharp even at a mile away on an overcast day! Clearly, this was a similar setup to the one used to photograph the topless Kate Middleton. Believe it or not, I never imagined using a lens this size for anything but nature and wildlife photography. Now, after seeing the power of this gear firsthand, it definitely has the ability to target someone who is not even remotely visible to the, ahem, naked eye. In the wrong hands, this is a frightening tool. 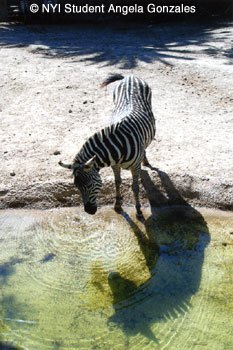 Picture of the Month Zebra

I have written before about shadows as they have appeared in various Pictures of the Month. Once more the topic arises in… 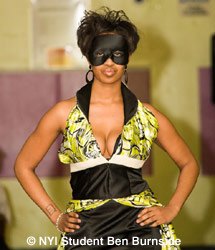 As an NYI Advisor, I receive a wide range of questions every day—everything from basic camera operation to the details of professional technique. Sometimes a very enjoyable thing happens: a…