When Bill Fairbairn sent some photos of Vice President Joe Biden to the school, we wanted to know more and thought it would make a good story. As a school, NYIP takes no sides in political races, but during election season it's often relatively easy to gain photo access to campaign events and other appearances of local and congressional candidates as well as the presidential candidates. Remember that only local law enforcement agencies or people running an event (NASCAR, NFL, etc) can issue "official" press passes. The NYIP photographer ID card is a courtesy card, meaning that we ask people to extend the courtesy of access to our students. That said, Bill's preparations and his experience are instructive. We thank him for his article as well as his service to our country. Plus, not only is a he good photographer, but he writes well too! Thank you, Bill Fairbairn.

Taking a chance at a higher profile event than ever before, I tried using my NYIP Photoworld Press Pass to get into the Press Pool for a chance to photograph the Vice President of the United States, Joe Biden. Previously, my pass has come in handy for very local, rural Missouri activities such as political or sporting events, but never had I dreamed I could get to even try and get into a press event of this magnitude.

During the summer I was attending the Disabled American Veterans (DAV) annual conference in Las Vegas at Bally's Hotel and Casino. Anticipation was heavy as it's an election year and we almost knew one of the big three or four would be there to try and get the veteran vote. By big three or four I mean the President, VP Biden, Romney and there was a chance that Romney would use this event to announce his VP selection. The last thing I imagined or even thought of before hand was getting into this very special press pool. I was just traveling from Missouri to Las Vegas to attend a convention.

As it turned out, Joe Biden was the representative there to speak on behalf of the administration. Prior to Biden's speech I had casually flashed my Photoworld pass to get up front and get some pretty nice photos of J.R. Martinez, the DAV Member of the Year (you may know him as the "Dancing with the Stars" winner.) Having an Official Photographer badge attached to my camera bag basically gave me free access to the convention hall. This is what I want to stress to all students and graduates: Use the pass, it works. No one was going to question me as long as I had a camera and an official looking pass.

The day before, I flashed the pass to get up close shots of Gary Sinese who was presented with the Lt. Dan Magic Legs Award for all the volunteer time and effort he spends with veterans and veteran issues (you may know him as Lt. Dan from Forest Gump and the lead in CSI:NY.) That night, I used my pass to get up front and take photos of Sinese playing for the crowd with the "Lt. Dan Band." Additional photos may be seen on my Web site Phozark Images. 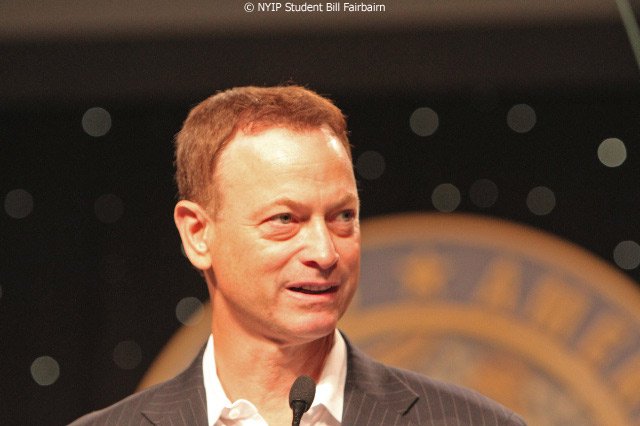 OK, back to Biden. When an actor or semi-famous person walks around or attends a conference, security is minimal. When the man who is a heartbeat away from being the leader of the free world walks in, things change drastically and in a hurry. I decided to "go for it" and brought my Photoworld pass with my photo (laminated), one camera (Canon 7D) and one medium zoom lens (my walk-around Canon 28-135 mm f3.5/5.6 IS USM) just in case I couldn't get into the conference's press pool and had to quickly check my gear somewhere. I wasn't going to bring my entire photo backpack with all my equipment on the off chance I was going to get in.

Walking into the press credential suite I had a nervous feeling, but at the same time, the thrill of being with true professionals as I saw television, magazine, radio and newspaper staff members all vying for acceptance. When I got to the front of the line and was asked who I was with, in one fluid motion said, "Photoworld out of New York," and flashed my Official Photographer badge at the same time like it was an everyday occurrence and I'd done it hundreds of times. I was logged into a database and sent on to the next step.

The next hurdle, after getting by the press scrutinizers, was making it past the real test: the Secret Service agents. They inspected my press pass, driver's license and retired military ID and passed me to the next stop. So far, so good, this seemed too easy. 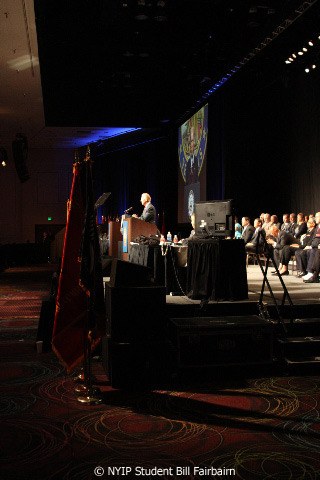 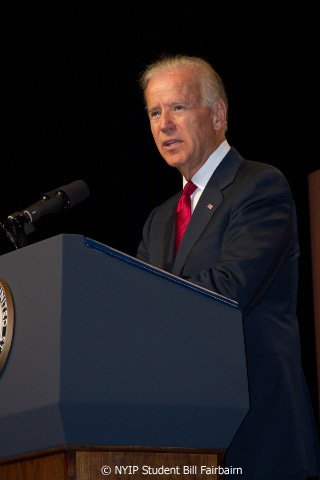 For someone just beginning Unit Three of the NYIP training program, I think I did pretty well at keeping my composure when two Secret Service agents inspected my camera and lens. My 7D is fairly new and I had visions of it being dropped or something. Looking back, these agents do this every day so just like that, I was cleared, given an official "Trip of the Vice President PRESS" card with my name, affiliation (Photoworld) date and location. Yes, the Photoworld pass works and had just opened a huge door for me. I'm glad I took the time to glue a professional looking photo on the badge and then laminate it.

Next, we were marshaled by an agent dealing with just the press and told to stay close. We entered the hall, climbed up on the risers, fairly front and center and told to wait there. After a few minutes, I had the Vice President of the United States in my viewfinder, wishing I had brought my 70-200mm f/2.8 lens. However, the "special agent" said she would have us escorted up two at a time to the pit. The pit? What's the pit? Turns out the pit is an up-close area, off to one side of the stage to take photos at close range. On top of that, we were given an additional 2-3 minutes to go down on the floor and get even closer. No need for the 70-200! There I was 20 feet from Mr. Biden. 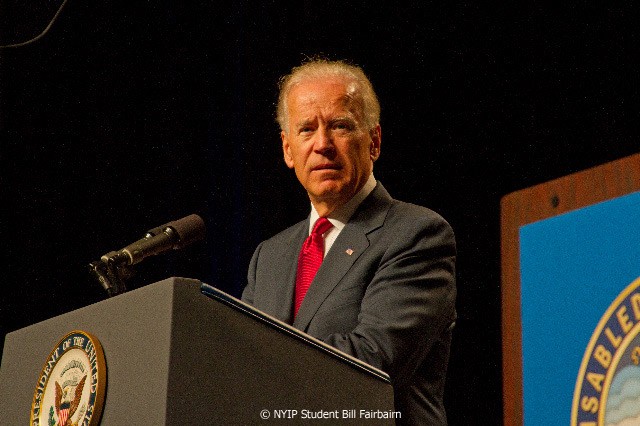 My advice to anyone with a Photoworld pass is to always have it with you — it works. Also, have the confidence — your training pays off. As proof, I had to set up for the proper lighting conditions on a new camera on the fly. Lighting conditions changed dramatically from site to site even within the convention hall. So there I was with the real press pool, thinking, "Now what did I read or did they say on the NYIP CD about aperture, ISO, white balance and shutter speed?" Then I realized I have some skills working in my favor — ones picked up from NYIP. As luck would have it, VP Biden even helped me down off of the press pit riser and had one of his secret service agents take our photo. Prominently clipped to my collar: my new key to this world, my "Photoworld Official Photographer Pass!" 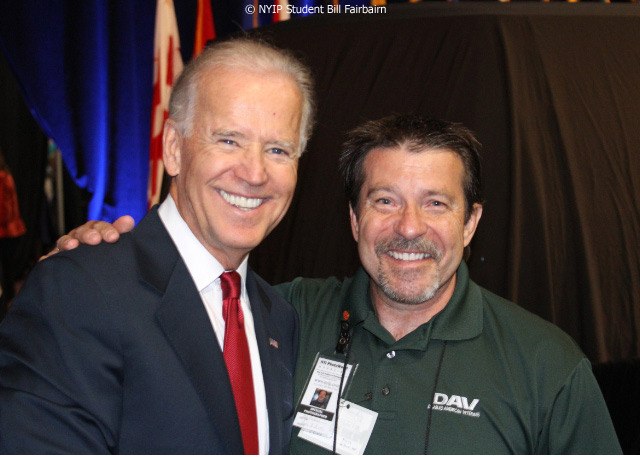 All of my images of Vice President Biden may be seen on my Web site www.phozark.smugmug.com. 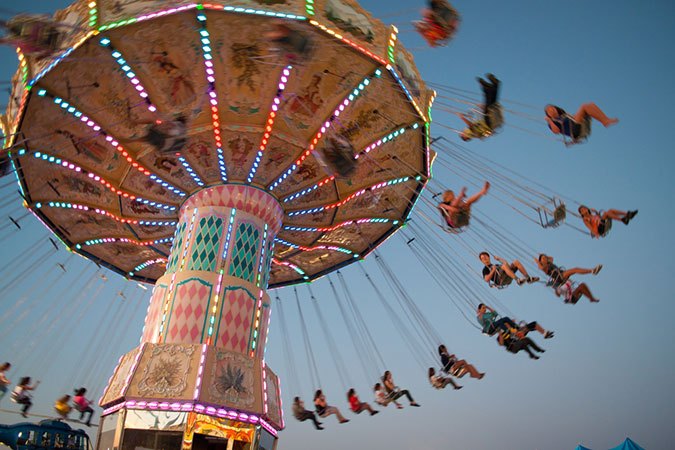 Although in photography blurriness is often viewed as a mistake, there is an interesting and creative way to intentionally capture motion blurs in your images. By experimenting with shutter speed,… 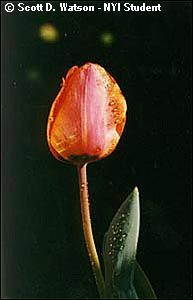