Photographing Puffins in the Wild

You never know where NYIP Student Advisor Chris Corradino will head on his vacation. This July, he set his sites on Machias Seal Island, a speck of land in the Bay of Fundy of the coast of Maine. The Island is contested territory, claimed by both the U.S. and Canada (and Britain before that) for centuries — since the Treaty of Paris settled the Revolutionary War. Fortunately, the dispute is peaceful, and visitors from both countries can visit this major bird sanctuary.

The real battle takes place on the Island. Any wedding photographer will tell you the tonal spread between the groom's black tux and the bride's white gown is an exposure headache. Particularly in bright light. Enter the Puffin — ignore the riot of color on the bird's beak and around its eyes. Its back has black feathers, and the belly is white! That means exposure is critical. How to handle the situation? Read on. And make sure to watch the video made by Chris's wife, Sue, inside the tiny blind on the Island. Thanks to both Chris and Sue for this interesting article and eye-catching pictures.

Thousands of Puffins surrounded us and I excitedly fumbled to set up my tripod in the tight confines of the small wooden blind. My wife and I had driven over 600 miles, taken a two hour boat ride, and transferred to a smaller boat before making a dangerous leap onto land while treacherous waves crashed in behind us. We had finally arrived on Machias Seal Island! 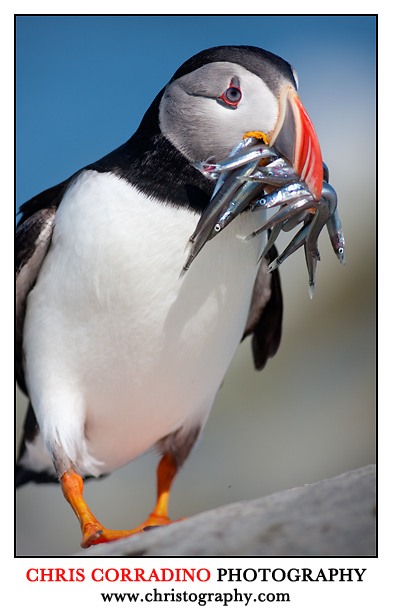 There were nearly 10,000 birds flying about and resting on rocks. Best of all, they were carrying fish back from the ocean to feed their young. This was what we came for, and I breathlessly shot over 600 images as the action unfolded around us. Working in a blind was more difficult than I had anticipated, especially with a tripod. 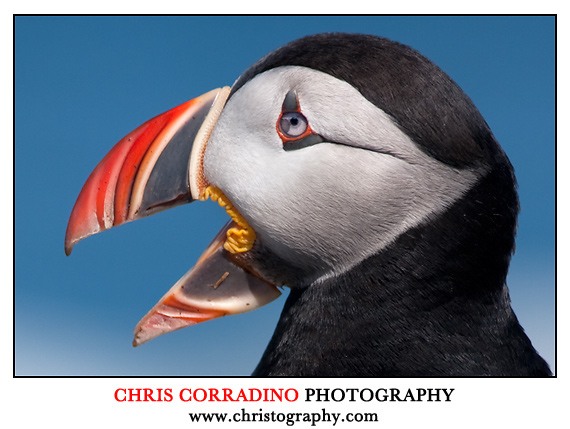 Just overhead, the Puffins webbed feet slapped about the wooden roof, reminding us exactly how close we were. The smell of seawater and fish was heavy in the air. Using my 400mm lens I framed some tight portraits, and then switched to a 70-200mm on a different camera for more full body compositions. Ultimately, I found the 400mm to be the preferred lens. One of the important aspects of the shoot was to find nice clean backgrounds without distracting elements. There were two or three spots which were ideal, but the birds weren't always there. Nevertheless, I focused on the spot, and waited. Sure enough, a Puffin would land and I began to rattle off exposures. When they had fish in their bills, I would fire a series of about eighteen shots in three seconds. Then, as quickly as it arrived, it vanished underneath the rocks to feed the young.

It was approximately 9am, and the conditions were sunny without a cloud in the sky. I had to pay careful attention to the histogram to properly expose the bird without blowing out the highlights. My approach was to expose as far to the right as I could in order to capture the detail in the black feathers while stopping just short of overexposure. Here is an example. Notice how the data falls just shy of touching the wall on the far right. This means I have not lost any detail in the whites. 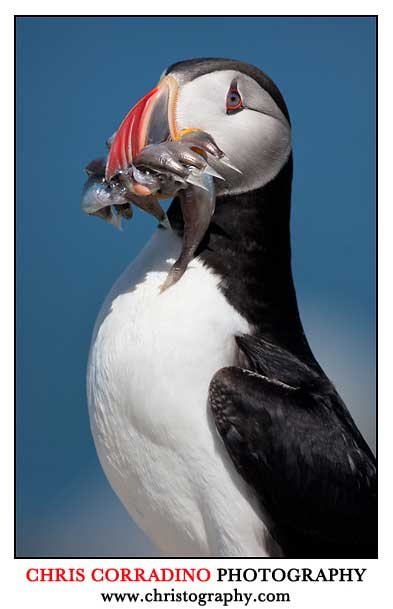 The technical considerations were as follows:

Puffins steal the spotlight, and with good reason. They are incredible birds to see in person, and fun to photograph. Yet, you may be wondering, what else is on the island? How about Razorbills! Exotic looking in its own right, this bird was a photographic challenge due to the black on black coloration. Still, I'm so glad I took some time to capture images of this beautiful bird. Using the same techniques noted above, I was able to retain feather detail while revealing the dark eye.

This island isn't only for the birds. There is actually an old Lighthouse here which is operated by the Canadian Coast Guard. I took a picture with the 70-200 as the boat approached. Interestingly enough, ownership of the island is contested with both Canada and the United States having claimed it.

As the boat pulled away and Machias Seal Island slowly disappeared in the distance, I realized just how lucky I was to have seen these birds in the wild. Maine may be known as "Vacationland", but on this island there are no souvenir stands or ice cream parlors. In this little pristine section of the earth, the birds far outnumber the people. It's their sanctuary, and I'm grateful to have shared it with them for a short while.

A few days after returning home I submitted one of my favorite images from the trip to National Geographic online. It was selected as one of their "Daily Dozen" and now appears on their website. There's a chance it could run in the magazine as well. I was honored they selected my image. Here's a screen grab of the shot. 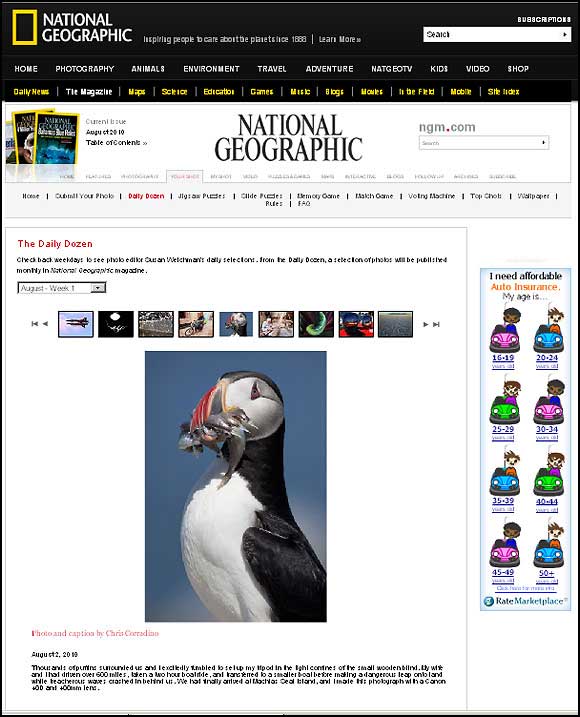 While in the blind, we filmed a short video in which I explain many of the techniques mentioned above. Check it out here: 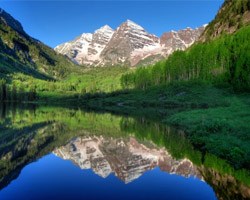 A Lesson in Capturing Reflections

The New York Institute of Photography is the world’s largest online photography school, and because we are, we often publish fun and useful photography tips. Please enjoy! 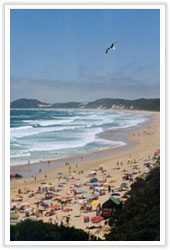