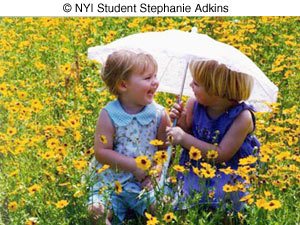 There are photographs that are subtle and those that are not. The picture we've chosen to represent the theme of Spring is one that is not subtle. How does this tender image by NYIP Student Stephanie Adkins communicate its story to the viewer? Let's examine it by considering NYIP's Three Guidelines for Better Photos.

Guideline One: Know in advance what you want to be the subject of the photograph.

The obvious subject of this photo is two young girls in a sunlit field awash with flowers, conversing under a parasol that casts a nice, even light across the girls' faces.

On one level this is a fine portrait of the two girls. Whether they're sisters or just good friends isn't clear, but we know that the parents of these two tykes would love this professional-looking portrait. In fact, our business sense tingles with the possibility of selling large, matted and framed enlargements of this photo to parents and grandparents alike. It's a beautiful image.

But there is a deeper subject here as well. While every good photograph has a subject, really great photos often suggest a universal theme or message, and that's what we feel here.

To our eye, this is more than a portrait of two girls. It doesn't matter that we don't know these children or the location of this flower-strewn field. The photo conveys a freshness and youthful vigor that we associate with the universal theme of spring

Before we examine the elements that suggest this theme, let's factor in the other two NYIP Guidelines.

Guideline Two: Organize the picture and use techniques that give emphasis to your subject.

Here, Stephanie has emphasized the two girls by making them large, placing them up front, framing them with the parasol, and surrounding them with elements (flowers) that don't distract attention from them.

In other words, get rid of any elements in the picture that will distract attention from the subject. In this picture, Stephanie has done that. There's nothing we see that distracts our eye from the subject. The girls are seen against a uniform field of yellow flowers. We don't see any weeds or other objects, just flowers.

Now, let's get back to the idea of a universal theme. This picture is filled with the icons of spring — spring flowers, a parasol that suggests spring showers, and two young girls sharing a light moment in the springtime of their lives.

There's one other thing to note here. The two girls are looking at each other, not at the camera. We think this strengthens the picture because it shows a relationship between them. As we have said elsewhere, the key to any portraits of more than one person is to show a relationship among them. Stephanie has done that here. Because they are not looking at the camera, we can see this as a candid glimpse of a carefree, flower-filled world that's bursting with new growth.

This is a fine photograph for the spring season, implying a sense of youth, beauty, renewal, and possibility. 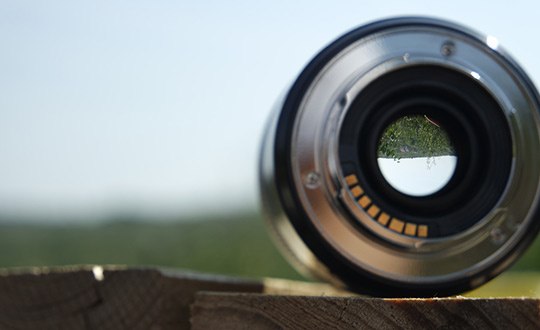 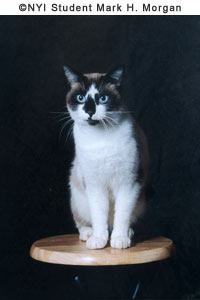 It's easy enough, I think, to photograph this world's ugliness; there's an abundance of it…