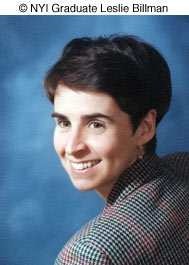 When I decided to go back and study photography, it had been years since I’d thought about its elements. I’d done "serious" photography many years ago, shooting for my high school newspaper and yearbook, and had been trained in darkroom work by my grandfather who was a wonderful black and white photographer. However, once in college, and then law school and then Life, I surrendered to the easiest and quickest (and only intermittent) photographic experiences, without putting a lot of thought into the shots, and certainly not approaching the shots from the perspective of art, or work. As a result, my skills and knowledge about photography receded with the passing years.

I admit to being a geek; I love computers. When digital photography first surfaced, I was intrigued by the marriage of computers and photography. I had a couple of early model digital cameras, and realized how much I had forgotten about photography in general, and also how much I didn’t know about digital imaging. I decided I wanted to refresh my knowledge bank about photography in general and to learn about this new digital world. I started looking for a concentrated body of coursework that would address those goals. There are very few photography programs in my area, and I didn’t have the time to drive to and from those more distant programs. The NYI program fit the bill and allowed me to study at home, when I had the time to do so. I’m pretty driven and can be very focused; I set a fairly demanding study schedule for myself, and was actually able to keep to it because I was so interested in the coursework; it was exactly what I was looking for.

I love color and light, and I’ve come to understand that combinations of color and light as we see them around us exist only once, in a unique fleeting nanosecond, before some component of the image changes. The subject moves, the sun moves, the light reflects differently, and the image as you just saw it is gone forever, never to be replicated exactly as it was. Photography is way to create and preserve those unique moments.

How was the NYI Course? 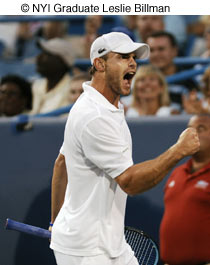 The NYI Course was great. I had never had any formal photographic training, but had, years ago, absorbed quite a bit of completely unrelated information about photography. The progression of the body of information clarified and brought all of those disjointed information bytes together into a cohesive, comprehensive understanding of the different topics covered in the Course. The tapes were easy to listen to, and the interaction between Don and Chuck was both entertaining and informative. I was assigned to a terrific and seemingly omniscient Student Advisor, who patiently answered an endless barrage of questions, referred me to resources, and who slathered either praise or criticism, depending on which was warranted.

How did you get your first paying photography job?

It couldn’t have been harder. I was hired to photograph a little herd of four shiz-tsu dogs, who careened about between my feet, and bounded on and off of the furniture. They have hair down in their eyes to start with, and no more than two at a time were ever looking my way, let alone giving me a good face shot. The people wanted a portrait, as though it might be even within the realm of possibility to get the four dogs situated together and showing enough face to be considered cute. It was hellish. But I really like dogs and with patience, split-second timing and a lot of good luck, I was able to capture some shots that they liked. 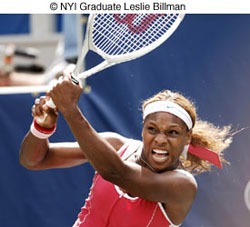 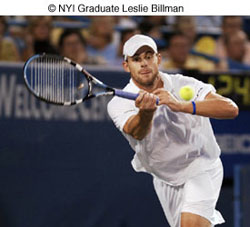 After completing the NYI Course, serendipity and a touch of nepotism, I was afforded the opportunity to travel to California to photograph the women's Professional Bank of the West Tennis Classic. The final that year was played between Lindsay Davenport and Venus Williams. As a lifelong tennis fan, I was awestruck with the opportunity to be courtside, combining two strong passions of tennis and photography. Another collision of good luck and a well-placed family member got me credentialed to photograph Pam Shriver's charity tennis event in Baltimore that fall, which happened to feature Maria Sharapova and Andy Roddick. From that point on, I had a portfolio of pro tennis stars, and on the theory that the worst they could say was no, I inquired of Wireimage if I could shoot some tennis events for them. They didn't say no. In fact, they said yes. Since July, 2004, I've been photographing professional tennis events as a freelancer for Wireimage. My photographs have been published in Tennis Magazine, and in December, 2005, I joined the Big Boys when one of my shots appeared in Sports Illustrated. Sports Illustrated for Kids has also run one of my shots, and other buyers of my images include the Oprah Winfrey Show, the ATP (men's tennis tour organization), IMG (a sports management company), AOL, and ESPN.com. I LOVE the opportunity to photograph these events; it's truly a perfect fit for my two favorite activites!

You gotta play to win. Alas, I haven’t entered any contests or won any prizes.

I have an inordinate fascination with snow photos. My favorite taken by someone else is a perfectly exposed black and white snow scene taken by my grandfather deep in some forest after a blizzard 70 years ago. And my favorite shot from my own work is also a snow scene, taken in Annapolis Maryland after a blizzard several years ago. Mine is color and digital; I'm not at all confidant it'll still be around 70 years from now. 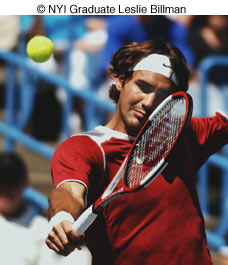 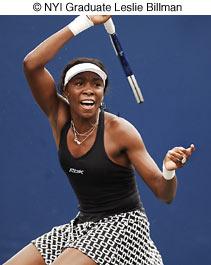 What's do you like best about working as a photographer?

I really enjoy almost everything about photography. I’m interested in the people it introduces me to, both as subjects and as colleagues. I think I’m so interested in sports and photojournalism because I want to be able to preserve those fleeting moments that will never, ever be repeated again in exactly the same way. Sports figures are generally passionate, and that passion shows in their faces at the peak moments; I love capturing those expressions, which reflect the sheer commitment, drive and effort required to win. 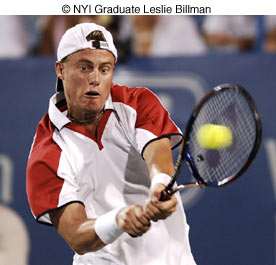 What's next for you in photography?

I’ve decided I’d like to try some other sports, but I found out the hard way that tennis is an extremely polite sport to photograph. You’ve got one player moving about predictably in a relatively confined and unobstructed area. A friend had asked me to cover a basketball game for him and just as I got a shot lined up, 4 spindly tall guys with twice as many elbows and knees as they should have would barge into the screen and screw up the shot. I decided there must be some more refined technique to shooting team sports, and this summer will be taking the weeklong Rich Clarkson sports photography workshop in Colorado Springs so I can get some help figuring out how to outmaneuver the likes of basketball players.