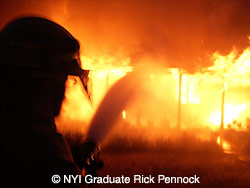 NYIP Graduate Rick Pennock is living proof that having a specialty in photography pays off, both in terms of getting your work out there and in terms of satisfaction.

After studying at NYIP, Rick was offered a job with First Responder News, a newspaper that covers New England firefighters. Since he's a firefighter as well as a photographer, he was a natural to take the shots that otherwise would be impossible to get. He landed that job thanks to the photos he had posted on his home Fire Department's website.

"I love my job with the Fire Department," Rick said. "It gives me the rare opportunity to show people not just what we face but also what firefighters around the world do everyday."

The job with First Responder led to a photo agency, 911 Pictures, run by Mike Heller, taking on Rick's work for representation. 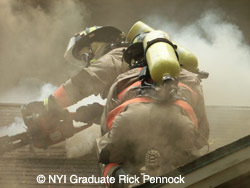 "Mike has also gotten my work represented in two firefighting calendars, and a photo purchased by the U.S. Air Force," Rick said.

And Rick feels it's because of his program at NYIP that he has a new angle on his firefighting -- the photographic angle.

"NYIP has had a huge impact on my life, and every time I am out shooting the lessons I learned echo through me and my photographs," he said.

In fact, because he was able to bring his camera to fires, Rick was able to immediately put the lessons from NYIP into action.

While studying a lesson that concentrates on teaching the student how to divide a photograph into three parts, Rick was called to a large tannery fire. He put what he was learning into action, figuring he could use the photos for the lesson. 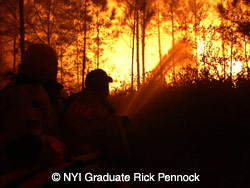 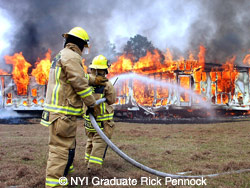 The photograph ended up printed in calendars, a book, and a magazine. 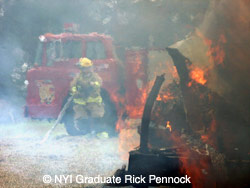 "Taking the NYIP course was a exciting challenge that taught me to look at photographs in different ways and from different angles," he said. "It also helped me to market my photographs."

Rick's interest in helping people in crisis goes back to his being a fan of the `70's television series "Emergency." Now, two of the cast members, Mike Norwell and Robert Fuller, have written him letters praising his photographs which appeared on the North Adams Fire Department's web site.

"I also learned that Mike Norwell was a photographer in the Air Force and we exchanged a few emails back and forth about it," he said.

Rick's dual jobs of fighting fires and photographing them certainly keeps him on the go. The process of interviewing Rick for this article was in fact interrupted because he was called in to help fight a large wildfire that broke out in Waycross, Georgia. 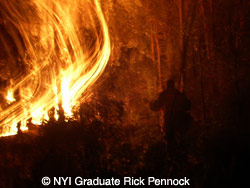 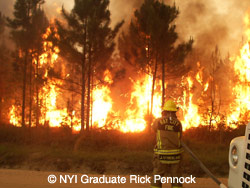 "Things were so bad that we got the call at the station and had to form a task force and be on the road in thirty minutes," Rick said. "The fire burned for almost three months, and to make things worse about three weeks later another wildfire in Atkison county began, about twenty miles from the fire threatening the city of Waycross." 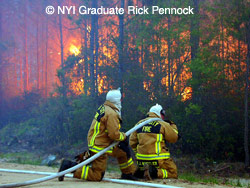 Of course Rick brought his camera.

"I was able to forge contacts with the local media as a result of this," he said. "The Valdosta News has featured many of my photographs since then, as well as The Berrien Press, Lanier Co. paper and The Quitman Free Press." 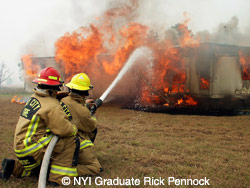 Rick's main interest is in "trying to get people to understand the world of firefighting through the lens," but he's also interested in keeping up with the new developments in cameras and accessories.

Rick now plans on continuing to get more national exposure for his photographs.

"It is a day by day and step by step process, the foundation of which all came from NYIP! I really loved every moment of taking the courses," Rick said. "I cannot say enough about the people at the school. The teachers have been able to pass on not just the experiences they have had but their passion for photography in a way that no one else has."