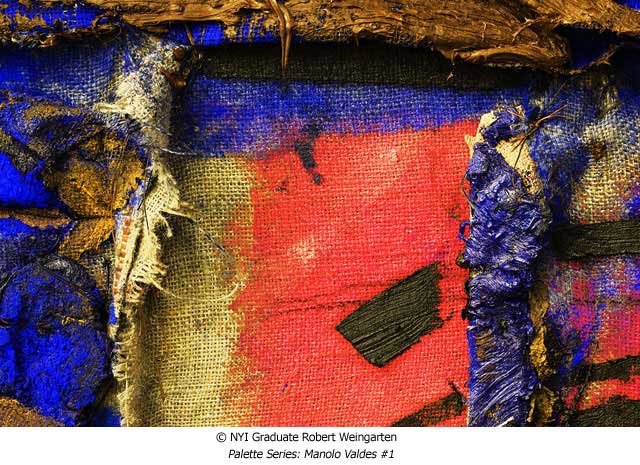 The sticky paint smeared on rough fabric looks so real, so three-dimensional, you're sure that if you touched it, your fingers would come away a deep blue. And yet, this isn't a collage under glass; it's a photograph, but the burlap and paint is so close, the focus so clear that you have to remind yourself this is just a two-dimensional image printed on paper.

This is the work of Robert Weingarten. And yet, this is just some of the work of Robert Weingarten; his skill, curiosity, and ability to invent are eclipsed only by his range — it's hard to believe that the close up shots of his Palette series are from the same artist as the pieces in his 6:30 AM series, which themselves are completely different from his Portrait Unbound series. 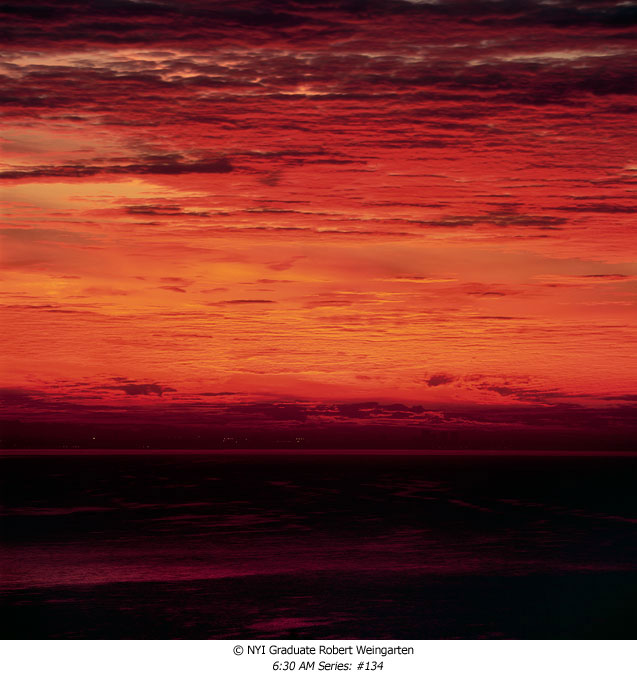 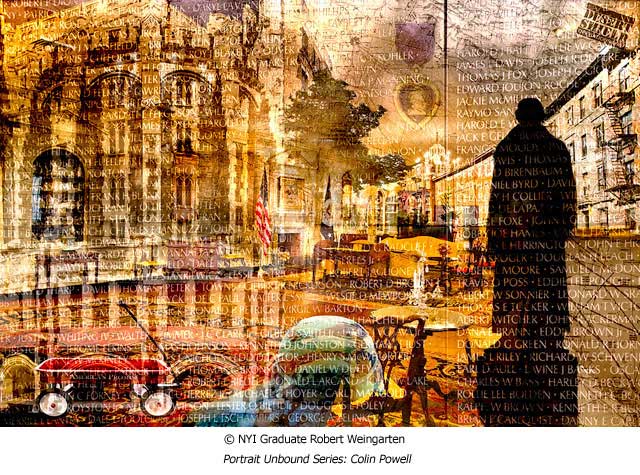 And this photographer — who has a photograph at the Metropolitan Museum of Art in New York, who has a solo show coming up at Smithsonian Institution, who will be giving a lecture on September 16 at the Getty Museum in Los Angeles — is a graduate of the New York Institute of Photography.

The photograph in question, the one that has you staring with wonder at the perfection of detail, titled "Manolo Valdés #1," is one in a series on the work of Manolo Valdés, part of Weingarten's Palette series, for which he photographed 40 artists' studios. But Weingarten didn't just take photos of the artists at work, or long shots of their studios. Instead, he focused on the artists' palettes, or on details of their works-in-progress. 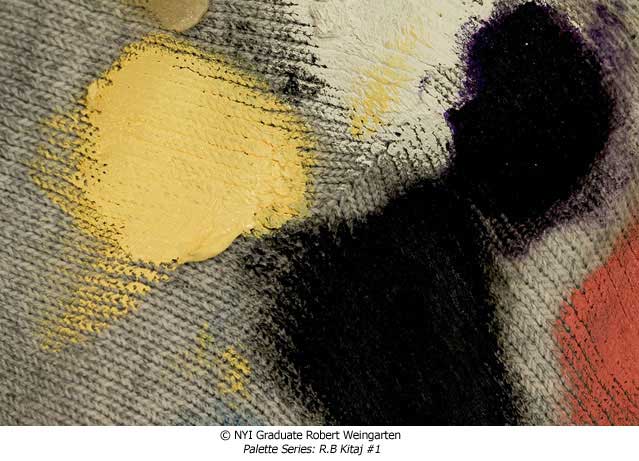 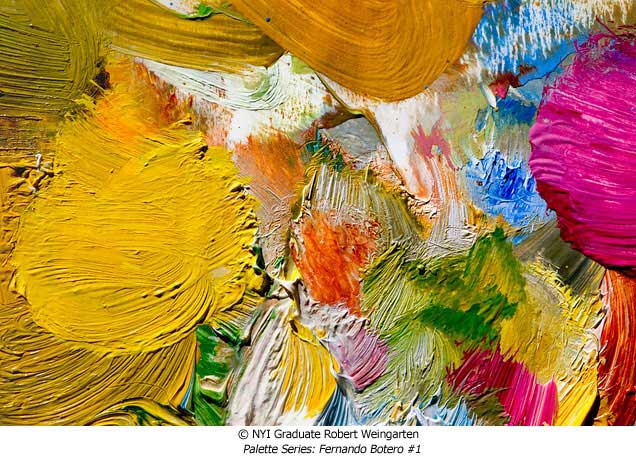 These photographs illustrate the art that is beneath the art, showing us how the artist creates the complete works on canvas not in a vacuum, but in a studio surrounded by bits of art; the detritus of the artist is itself art.

Perhaps most surprising about his work is that Weingarten didn't always work as a photographer. Growing up poor in Brooklyn, New York, he was desperate to make a better life for himself, and built himself a successful career in business and finance.

"I had to choose between photography and the desire to have a better economic life. I had a very strong desire to get out of where I was. Upfront had to be making a living and using my art as an avocational interest. I studied economics, worked on Wall Street, and owned insurance companies."

But by the time he was in middle-age, Weingarten realized that it was time to pursue the interest in photography which he'd continued to feed on the side since he was a child. 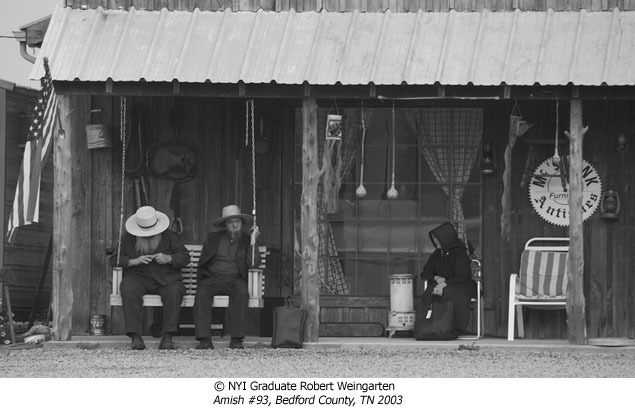 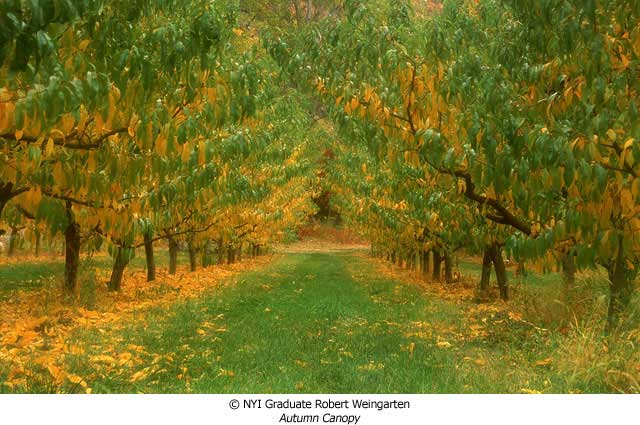 "In the mid-'90s, I realized that if I was going to follow my real passion I had to devote real energy to it, and devote my life to it."

He set about creating a course of study for himself, looking at hundreds of books of contemporary photography, finding those by living artists with an aesthetic sense close to his own. He contacted those photographers and asked them to give him private master classes, for which he would travel to where they lived and study with them for four or five days in the field.

But he also signed up at NYI. At a dinner party at the home of his oldest friend, Alvin Toffler, the author of Future Shock, Weingarten met Don Sheff, then the owner of NYI. Sheff explained how the Complete Course in Photography works, and Weingarten signed up.

"I addition to learning from these great artists, I wanted to refresh my memory about all the technical aspects of photography, and bring my knowledge up to date. I also wanted the discipline of having to do the projects in the lessons."

As Weingarten rushed to learn all he could, his instructor, Chuck Delaney, told him not to hurry, saying, Weingarten recalls, "This isn't fast food. This is a gourmet meal."

"It really did work for me," Weingarten says of the Course. 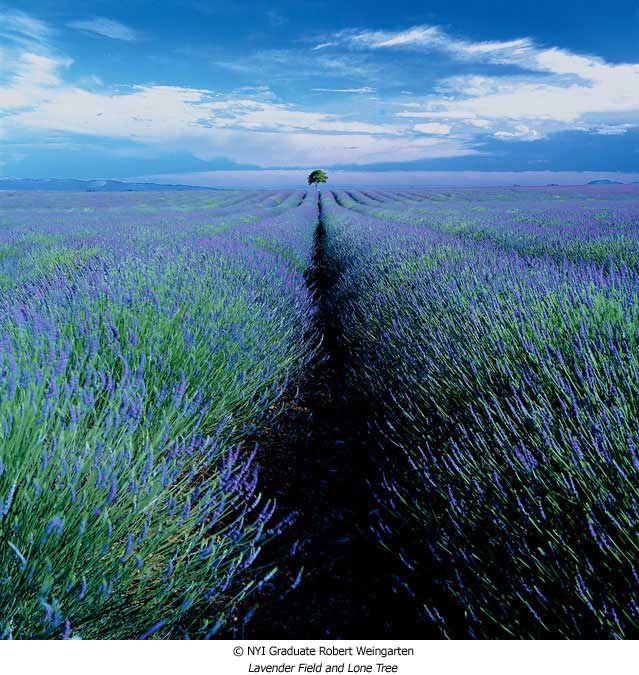 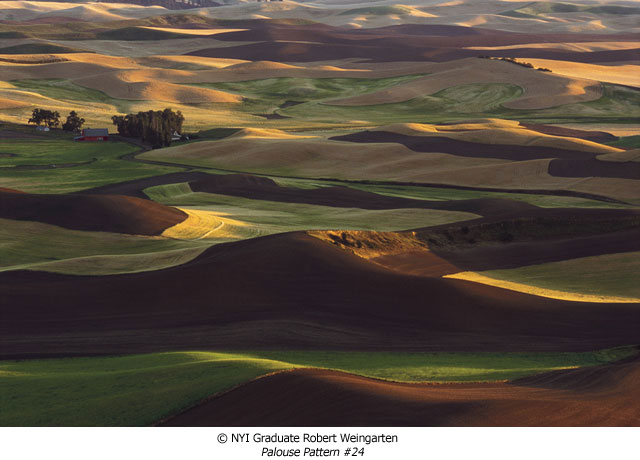 Weingarten had been surrounded by art for much of his life, escaping as a child into photography and paintings, taking photos, setting up a part-time darkroom in the family's only bathroom, making trips to the museums in Manhattan.

Not that Weingarten was a solitary artist as a child. But when the other kids were playing stickball, he'd race up to the rooftop with his camera to see if the aerial shot would make a good composition.

His parents didn't exactly encourage their son's interest, but they didn't discourage it, either. "They were passive about my 'hobby,'" Weingarten said. "But I also played tennis, and even competed in tournaments."

Since those days of visiting museums as a child, Weingarten has always been informed by painting; his painting library is as big as his photography library.

One series in particular influenced by the work of painters is his 2003 series titled 6:30 AM, which Weingarten says was influenced in particular by Monet's Rouen Cathedral and Haystack series. 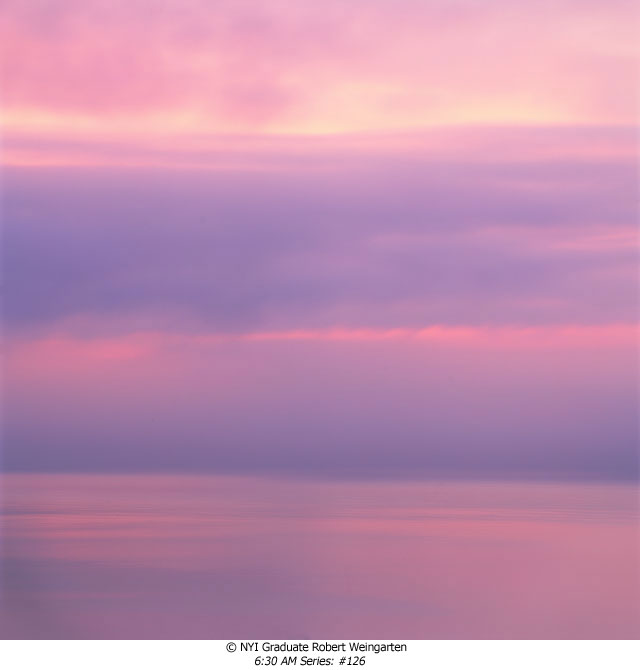 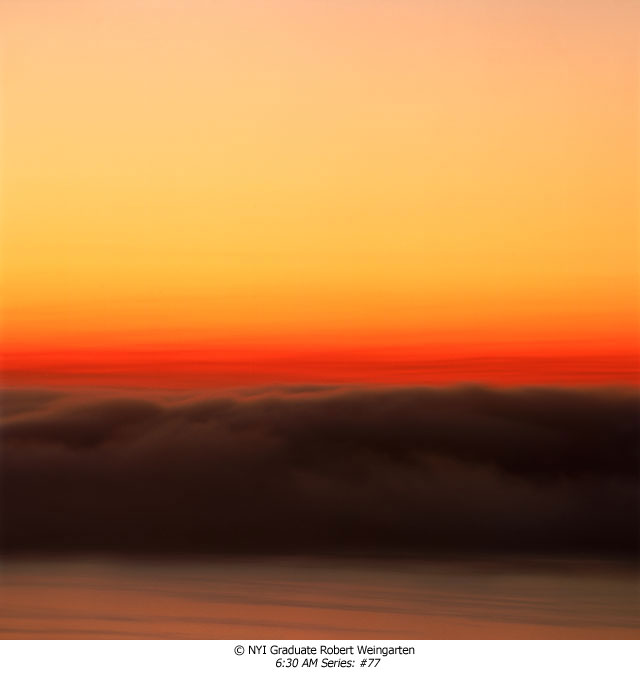 It's easy to see that influence here; for the 6:30 AM series, Weingarten shot a series of photographs over the course of one year, all from the same vantage point from his sea-side Malibu home.

These photographs are in a way the opposite of the Palette series; some of them are so abstract that they seem to dissolve into a wash of color — or colors, to be more exact, because even those where no horizon is visible are comprised of a range of shades and tones that keep the imagination involved long after you stop wondering where the water ends and the shore begins.

"It was important for this series to be shot on film because I knew the question would come up about digital manipulation. Later, I created digital prints, but it was analogue capture," Weingarten said.

In the series, he wanted to address the question of "chromatic adaptation," the idea that "our eyes are informed my our minds."

For example, "We know the ocean is blue, so we'll accept variations of blue, but we won't accept red." The film is set to a particular color of light, and records that color accordingly. Weingarten, in this series, wanted to show the changes in the chromatic adaptation in the same place at the same time, on different days.

"We don't always see it, but the film will see it," he said. "The changes are dramatic."

Weingarten's most recent series takes another leap, in terms of imagination, composition, and technique. For his Portrait Unbound series, Weingarten set out to create portraits of people who are giants in their disciplines, from Supreme Court Justice Sandra Day O'Connor to Chuck Close to Edward Albee. And this series is obviously created digitally, and could only be created digitally. The portraits are huge: 60 x 90, and some them have as many as thirty layers. 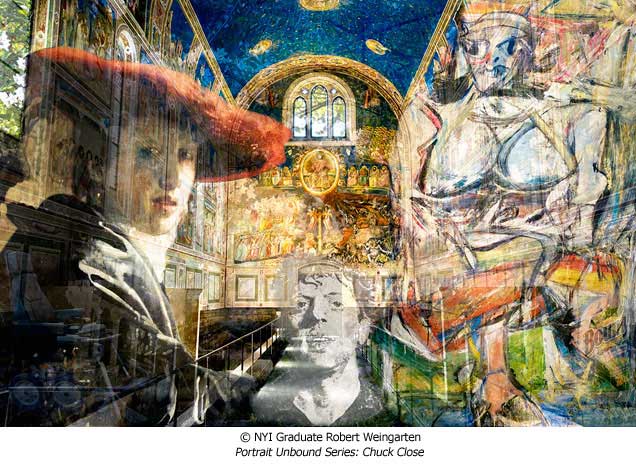 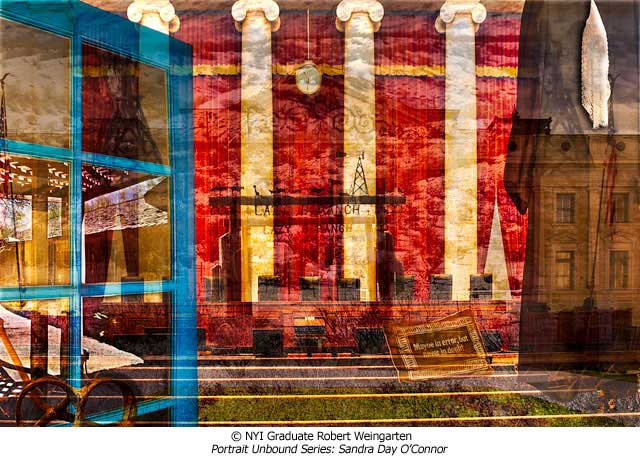 For each portrait, Weingarten asked the subject to give him a list of things that defined the subject: "no family, no friends, no pets," but everything else. Weingarten then created photographs of those things and brought them together in a composite that illustrates who the subject is. This technique gave Weingarten a new way of exploring the possibilities of composition, as "the composition took place on the computer rather than in the view finder."

Weingarten was surprised by some of the lists his subjects gave him, learning, for example, that Buzz Aldrin is interested in sea as well as space. "I got these fascinating lists from people," Weingarten says, "and then I did something I'd never done before; I sat and created a composition." 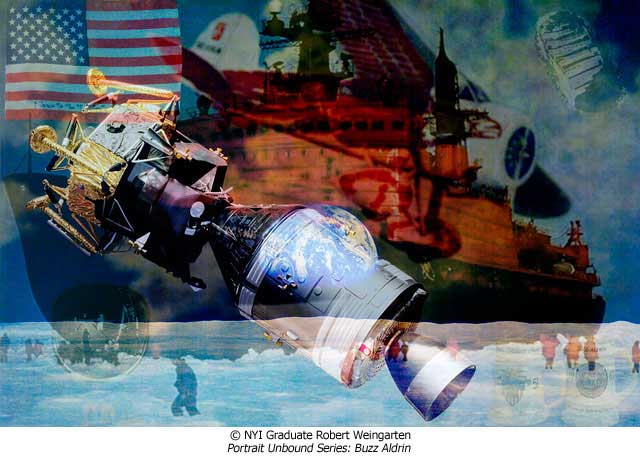 "Photography is deductive: everything we take is a carve-out of the whole. Painting is inductive: you start with a blank and build up. This series gave me the opportunity to be both deductive and inductive."

"A traditional portrait is a likeness of a subject in a given time and place — a specific shot. The 'portrait unbound' is not time or place specific," and can therefore perhaps better illustrate who the person is in a deeper sense, Weingarten said.

"If somebody asks you to tell them about yourself, you're not going to give your height, eye color, hair color. You're going to say something about who you are: your background, what you do, what you're interested in. That's more likely the way you'd describe yourself."

Weingarten's talk on September 16 at the Getty Museum promises to be a fascinating look at photography, and at the work of this man who has now himself become a master photographer. Titled "My Journey from Film Fidelity to Digital Metaphor," the lecture will take the audience through Weingarten's development as a photographer. 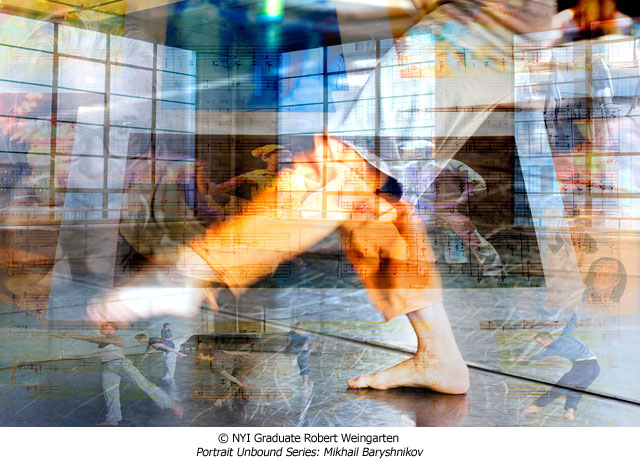 In the lecture, Weingarten wants to explore "film fidelity" — the ways in which film is faithful, and one can rely on it — and "digital metaphor" — how something like the Portrait Unbound series is all metaphor.

Weingarten's work can be see in New York at the Metropolitan Museum of Art, the Whitney Museum, and the Marlborough Gallery, where he is represented. His work is also in collections at many other museums in the United States and in Australia and Spain; for a complete list, visit his Web site at robertweingarten.com