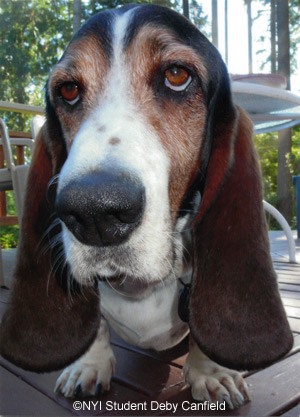 The photograph was made by NYIP student Deby Canfield of Woodinville, Washington. It won an NYIP Merit Award and also was featured in one of our Complete Course in Professional Photography lessons called "The Lens".

I chose this picture and Chet to write about for several reasons.

First, I've been a dog lover all my life, having had in the past a Scottish terrier, two American toy fox terriers, and three English cocker spaniels, one of whose pictures appears in one of the NYIP texts. I've even written an article on photographing dogs for this website. I love cats, too, and beautiful women but I'll save those observations for another day.

Second, Chet is a handsome example of a basset hound and a distinct pleasure to look at for aesthetic reasons. Vladimir Horowitz said that some people can play the piano and some can't. Well, some dogs are beautiful (Chet, for example) and some are not, but the lack of good looks is not important except perhaps in the show ring at the Westminster Kennel Club.

Third, Chet's good looks, notwithstanding, are presented in this photograph in an apparently distorted way, and there are some lessons to be learned here.

Parenthetically, I know that you all are waiting for the other shoe to drop, namely, the litany of the NYIP Guidelines, and so I'll get those out of the way right now. The strong subject matter, of course, is the beautiful basset hound. Photographer Canfield focused attention on the dog by deliberately enlarging the dog's wet nose and diminishing the size of the paws for emphasis and also placing Chet off center and up front (a good example of the Rule of Thirds). And the photographer also used selective focus effectively in order to soften the background.

The lighting is lovely — soft, diffused, thus eliminating any offensive harsh shadows. I am not denigrating harsh shadows. They have their place, and I have written about their power in other instances. But they seem somehow inappropriate here in this picture.

Now to the specific nitty-gritty ñ the distortion. If you have read this article carefully, and I know, good readers, that most of you have done so, you will recall that earlier I wrote "apparently distorted". I want to explore this idea of distortion. Is it real or only apparent?

Perspective, as it applies to this picture, means the sizes of individual objects seen here and the spatial relations between objects. How big is the nose compared to the paws, how far is the dog from the railing, what's the railing size compared to the trees, and so forth?

There is only one possible way to change this perspective, only one! And that is to change the camera-to-subject distance. Contrary to popular thought one cannot change perspective by changing lenses. Can I say with certainty that the size of the dog's nose, compared to the skull or the eyes, is the result of the choice of the lens or the result of being too close to the subject?

In this particular picture the answer is: both! The camera is not in the usual position for this kind of portrait with the result that there is apparent distortion of the perspective. Apparent, not real distortion caused by the lens. You must also consider the viewing distance, that is, your viewing distance from the picture. If you were to bring the photo right up to your face so that your nose was touching Chet's you would instantly see any sense of distortion disappear. In other words, by changing the viewing distance you change the perspective which now becomes normal in appearance.

But I said, too, that the lens is also the cause of the apparent distortion. Deby Canfield seems to have used a wide angle lens, not a normal choice here. A normal focal length or even a short telephoto would have worked better unless the photographer was deliberately intending a comic effect. Look at the dog's paws. A basset hound has very large paws, and yet how small they look compared to the nose. The wide angle lens has made the nose enormous and also has diminished the size of the paws.

If the photographer had stood considerably farther back and used the same lens there would have been no obvious distortion. So both the choice of the lens and the camera perspective have played specific roles in the presentation of this photograph.

Before I depart I would like to give you some food for thought. Or should I have said some Ken-L- Ration to chew on?

Let us start with a premise that you like the perspective in a particular scene and do not want it changed. You like the size of the various objects and you like the spacing between them. And remember that you cannot change perspective without changing the camera-to-subject distance.

Now suppose that in Chet's picture you wanted to include more of the scene. Do you change lenses, going to a wider one, or do you move back? You have to change lenses because you don't want to change the perspective, the result of moving back.

Let us all bid Chet goodbye now. Bow wow or arf, arf (whatever your preference may be)! 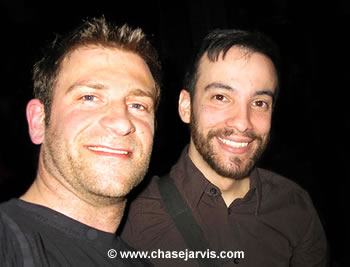 How to Photograph Flowers Part 1

Every year, the April showers do their job and in all parts of the Northern Hemisphere, flowers abound in May. Far to the North, spring may just be getting started,…