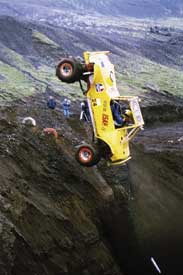 As an NYI graduate, Freysteinn G. Johnsson flashed his PhotoWorld press card and was given access to the action at the Icelandic Championship Tournament of A-Formula Off-road Racing. Standing only 35-50 feet away, Johnsson used his Canon EOS 1V and 35-80 mm zoom lens to photograph this driver steering his car - nicknamed Batman - up a course embankment.

Johnsson told us that the driver was in first place until he attempted this maneuver! The crash that followed left the car too badly damaged to continue - but the driver was fine, protected by a seatbelt, helmet, a special neckbrace, and the reinforced frame of the car. Why was he climbing the embankment, you ask? This was actually one of the course obstacles, and if you hesitate, you lose.

Same goes for the photographer. After all, the trick to getting this photo involves more than just gaining access. Once you're there, you've got to know the proper techniques to freeze the action and when the moment comes, you can't hesitate. Johnsson's NYI training gave him the confidence and skills he needed to gain the necessary access and then to decide on camera settings and know when to press the shutter-release. Johnsson used Fujichrome MS 100/1000 (a multi-speed daylight-type color reversal film with a basic speed of ISO 100 and push-processing capability to EI 1000), which he set at 1000 ISO, and he set his aperture at f/5.6 and shutter speed at 1/250th of a second to create this heart-stopping image.