NYI graduate George W. Petering was still a student when he stopped by our offices on the way to a safari in Kenya a few years ago. While he was here in New York, George spoke with Student Advisor Jerry Rice about what to do to make sure that he got good pictures of wildlife during his trip, no matter the circumstances. After all, who wants to return home from an African safari with disappointing photographs to show friends and family, or with nothing to sell or exhibit? 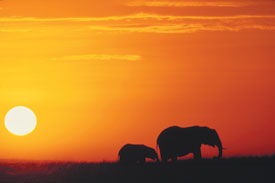 George followed Jerry's advice and after he returned to his home in Alaska, he sent us some of the pictures he took during the safari. This silhouette image of a mother elephant and her calf was one such image.

How did George manage to get this picture? George bracketed by taking several snaps of the same scene at different exposures. He started with the exposure that he thought was correct, then shot one f-stop over and under that exposure, then two stops over and under. When the lighting is difficult as it was in this shot, and when the scene is something you may never have the chance to photograph again, it's best to take multiple photos at different exposures and shoot a lot of film. After all, if you're trying to conserve film, you may end up spending a little less money but you'll likely return home empty-handed when it comes to the big shots.

Don't fool yourself into thinking that if you're a good photographer you should be able to get that perfect shot in one or two tries. That won't get you anywhere. Taking more and more photos will. One exposure will put the elephants in silhouette and provide proper differentiation between the orb of the setting sun and the colorful sky. That's the right exposure and you bracket to get it. 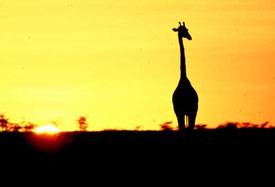 George used the same technique to get this dramatic photograph of a giraffe on the same safari.

George shot slide film during the safari, which was another reason to bracket. Slide film tends to be less forgiving of improper exposure than negative film. Whereas you might be a little off and still be able to get a good print from a negative, if you're under- or over-exposed with slide film, the differences will be noticeable. You need to bracket when shooting this kind of a scene with slide film in order to make certain that your photo will be neither too dark nor too light.

While the NYI Complete Course in Professional Photography is a home-study program, we're always happy to have students visit us like George did for a little extra feedback. So whether you're on your way to Africa or Alaska, we're happy to have you drop by.

By the way, George was recently in Africa taking more photos and we hope to be able to show you some of his recent work in a Student Profile just as soon as we catch up with him.